Upon consulting my photo album, where I file away a large part of my brain, I find our Missouri trip next in line for the “Last Two Months’ Adventures Series.” I found out a while back that my parents and sister were going to Missouri for my Aunt’s 75th birthday party. I didn’t think tagging along would be a viable option, but we found a way to make it work. I hadn’t seen my dad’s family in so long, and it had been far too long since I’d taken a vacation with my parents, so I was quite enthused at the prospect. Not to mention, a little reality set in. Seventy-five. I was taken aback by that number, considering that relatives are supposed to be frozen in time (or Carbonite, considering my last post). We used to take annual family vacations to Missouri, but it had been at least 10 years since I last saw her, and with our family’s iffy health record, I didn’t want to gamble on another great opportunity coming by in the near future.

Dad grew up in the Commerce/Scott City/Cape Girardeau areas of Missouri in a family of six kids – two girls, four boys – all named with “J”-sounding names. Three siblings remain, including Dad. It was very cool to reunite with his sister, her kids and grand kids, and a few other relations, as well as tour the old “stomping grounds.”

Most of the trip took place over the weekend, so Brian was able to watch the older boys. I wasn’t ready to leave my nursling yet, so I brought Elijah. I wish I could have showed off all my boys, but I think they may have found it generally boring, and we couldn’t swing all those air fares anyway. I enjoyed having my little buddy along and watching him revel in the experiences of a “train,” a plane and a bus all in one day!

Here’s the little man on the runway. The delight on his face when we took off was priceless! 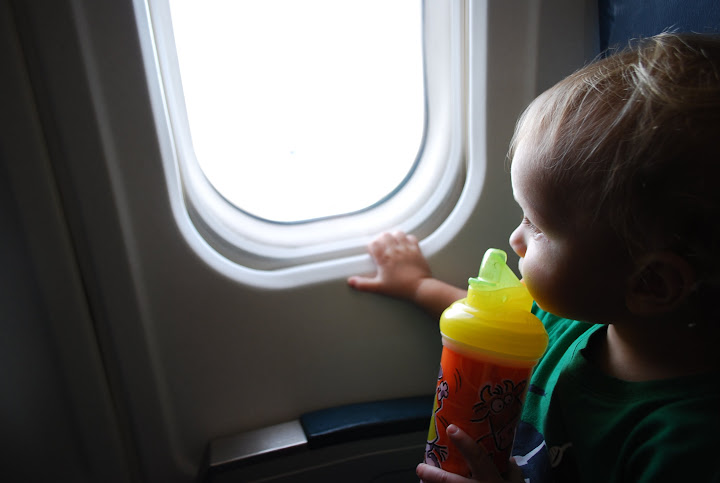 Here he is in the hotel, being powerful with the remote. And also, just cute. 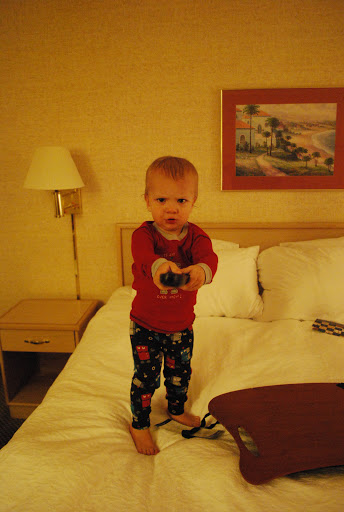 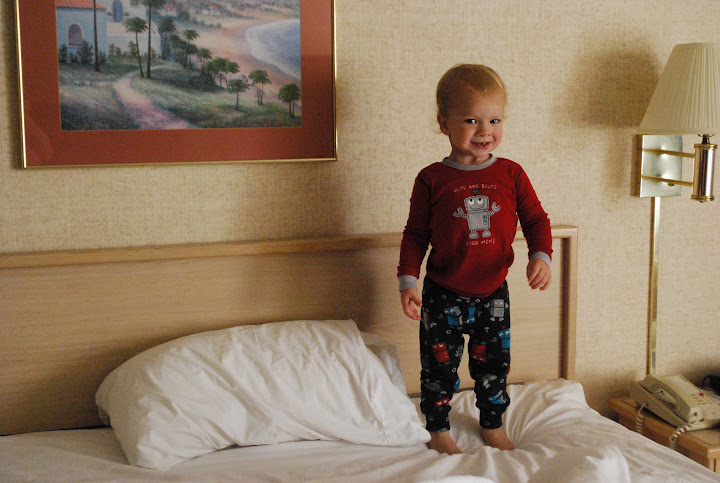 Isn’t this a great tour of Missouri so far? I’m sure you gushing parents can relate. Okay, here is one of many shot-from-the-zooming-car photos. This is the airport where Dad learned to fly. 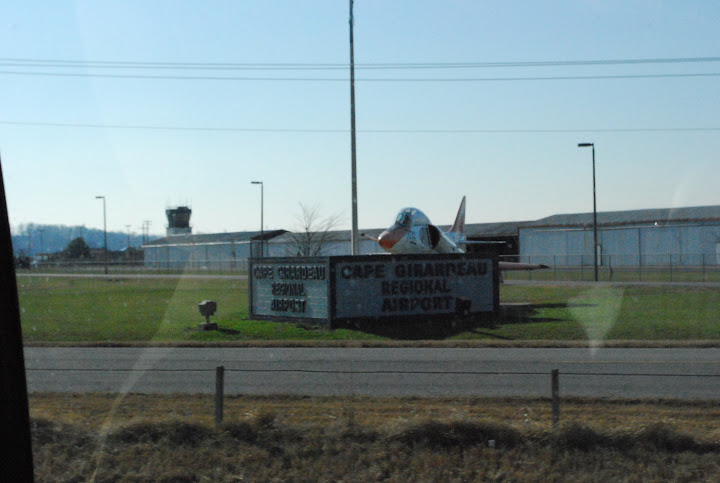 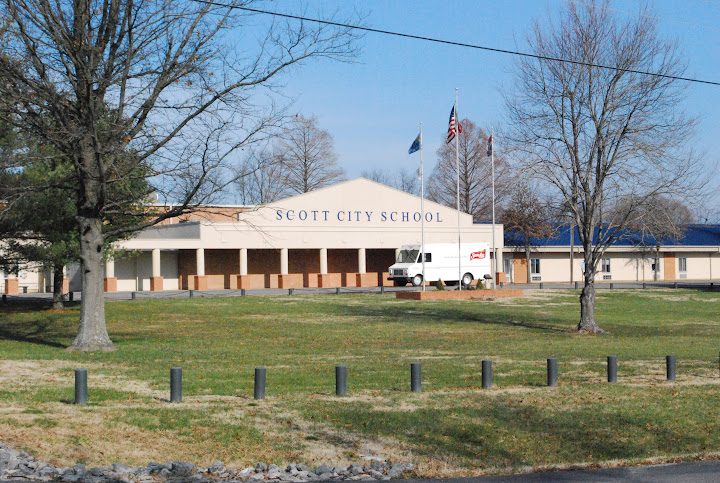 A gas station of some significance – Dad please chime in 🙂 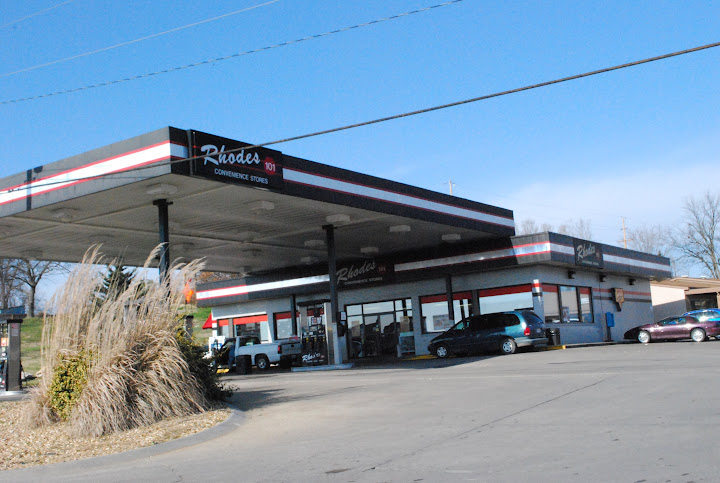 This should speak for itself. 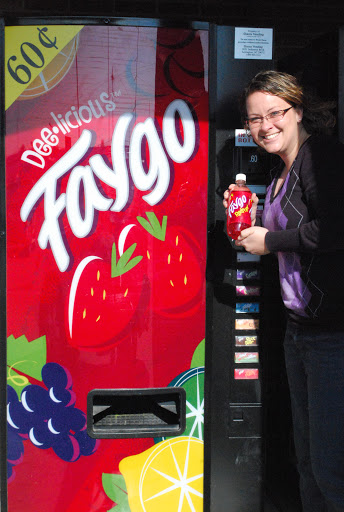 Grandma and Grandpa Skinner’s most recent home was on the far side of this overpass. My brother and I have fond childhood memories of smashing pennies on this track and finding old rail spikes. 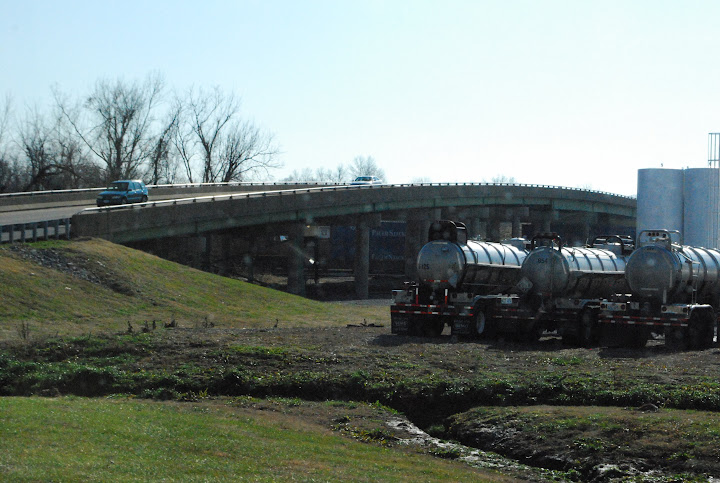 The grey trailer house and the double garage with the second-floor apartment belonged to Grandma Bea and Grandpa Joe. As a kid, it seemed like the coolest property. The house and garage seemed to form a labyrinth of ins and outs, and turns, with steps and cinder blocks going up and down. Eventually, we even figured out how to get on the shed roof. The curved drive was covered in gravel, and the crackle of our car tires rolling on it was one of my favorite sounds. The lot full of sheds didn’t used to be there, and the field in between used to be Grandpa’s garden. Two things Grandpa did best were gardening and fishing. When Grandpa Joe would come to Florida, he’d stand on the pier with his cane pole, flinging fish in the bucket, while the other dozen fishermen with their fancy rods and reels stood on the pier with their mouths agape and pails empty. 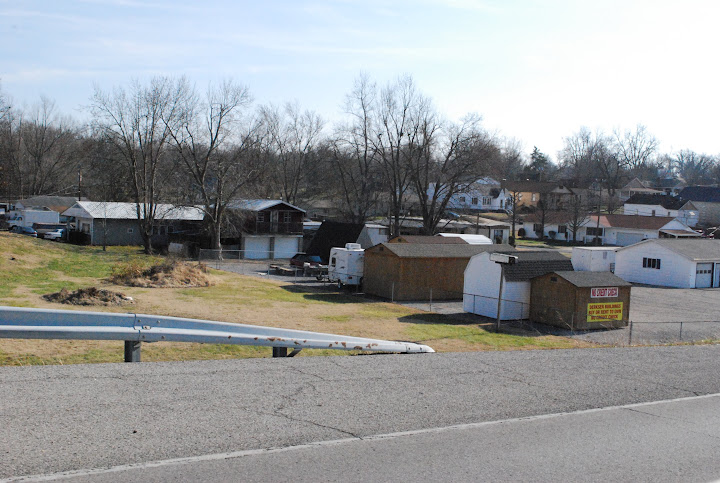 Here’s the front of the house. 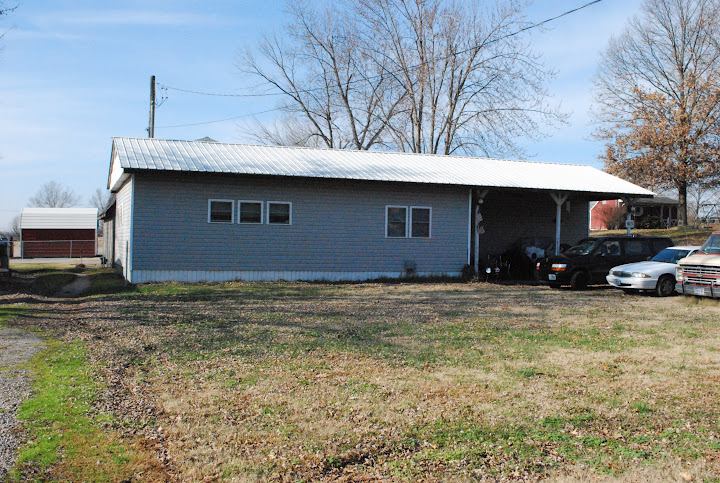 Not at ALL like I remember it. I seem to remember it being a yellowish color, with a cinder block wall out front. And trees. I definitely think there were trees. Grandma Bea had a porch swing out front, and we loved to make that thing fly! We’d clang and bang it on the metal siding of the trailer until mom would pop out and tell us to slow down. It was right out side the “dining room” – a small end of the trailer sectioned off for the table we’d manage to cram our many selves around. I remember looking a the large mirror and some sort of china cabinet against the back wall there. My most prominent memory of the kitchen was my mom frequently reminding grandma that she needed to keep lids on her milk and juice and keep her drinks and leftovers in the refrigerator. Apparently, Grandma had a habit of leaving things out and open.

The front door of the trailer led to the living room, where Grandma kept photo albums and trinkets on the shelves dividing the living room from the kitchen. I’ll never forget the smell of her house. It’s an oddly pleasant memory, for not being a particularly delightful odor. I have clear visions of my grandparents sitting in that room. Not frequently at the same time, though. Grandma would watch some TV or be sitting there to greet us or “plait” my long hair. Grandpa might have just been putting on his gardening shoes or waiting to pinch a small arm or trip an unsuspecting grandchild as he laughed in amusement.

To the left of the living room – the part the juts out – was another living space. I’m foggy on the contents, but I remember a large “mural” of a forest on the wall. I recall thinking it was odd, but somehow fitting. I spent a lot of time examining it. One of the living rooms had a pull-out couch that I’d excitedly jump on when my older cousin Kandi would come stay the night. Romping in Grandma’s house was so fun because of the metallic rattle the whole place would make as we stomped on the floors. Kandi and I frequently got ourselves in other forms of trouble, like when we’d sneak into the hall bathroom and mix up “potions” out of any product we could find in the cabinet. Mom would get mad that we were wasting Grandma’s toiletries, and I think was afraid we’d create something poisonous. [I can hear mom thinking, “See! I always have to be the bad guy! But, as a mom, I know that’s our job, and we’re so much fun in other ways!].

Our family stayed in the guest room down the hall on the Left. I remember being intimidated by a gun rack. I remember being amused by a really shaggy carpet. I recall a big fluffy bed. And, I remember what seemed like a really big, really cluttered walk-in closet.

I’m fuzzy on the rest of the house, other than a creepy laundry/mud room somewhere across the hall, that I’d bravely tiptoe through to get into the secret labyrinth.

Next door to the Right was Aunt Joyce and Uncle Bob Hamil’s house. She had a hair dressing “studio” downstairs. It may have been their more recent home in which I recall loving to bump down the carpeted stairs and play the “Duck Hunt” video game in the basement (Ooh! A gun! How excitingly naughty!). I remember her as a beautiful, graceful lady who was somewhat reminiscent of Dolly Parton, in the face only. 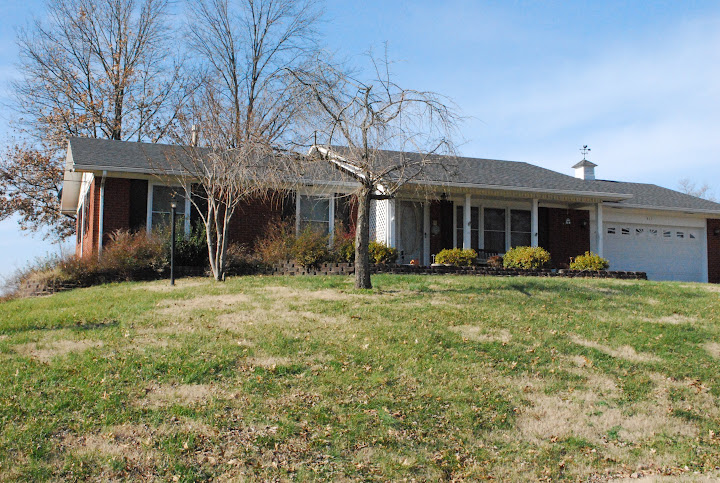 This was Aunt Joanne and Uncle Bill Lester’s house. He was a truck driver, and sometimes his semi would be parked out front. It was a very cool day to get to check out the truck. I don’t remember much about this house, but I recall Aunt Joanne singing crazy songs to us at the top of her lungs. She was just as peppy and fun-loving on this visit as ever. Sometimes we would walk or drive to her house. When we did our recent driving tour, I was shocked at how close she lived, because in my memory it was quite a trek! 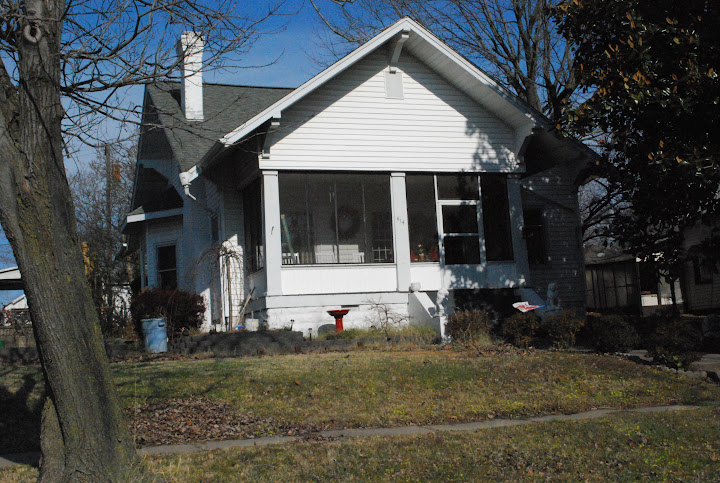 I don’t frequent them, but I really like cemeteries. We popped in at a couple of them where our family rests. I snapped a few pics of the Hamil’s at Lightener & St. Joseph Cemetery in Scott City. 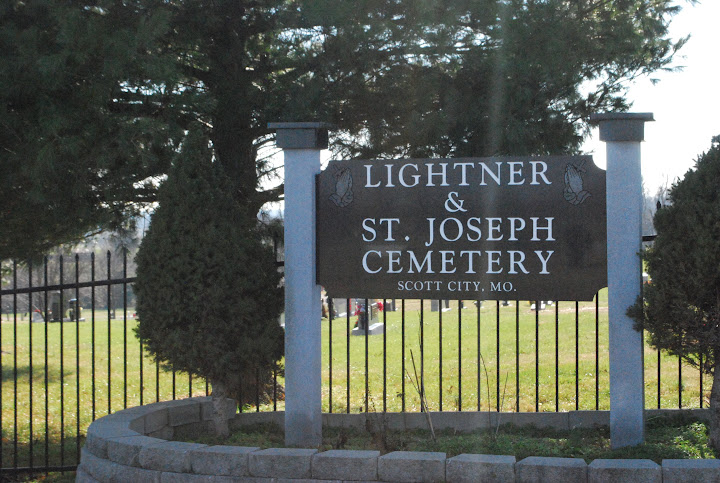 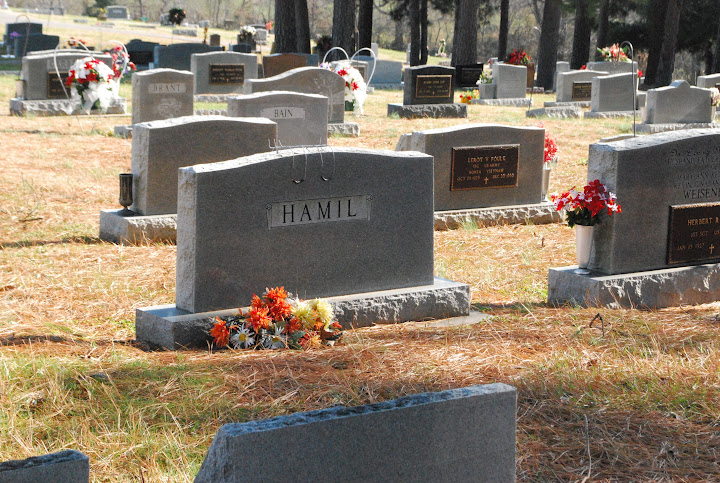 This one is for Travis. It is the saddest. He is the youngest son of Steve and Debbie’s three children, and brother to Dustin and Summer. He is a rail engineer, and they transplanted to Kansas years ago. Steve is my Dad’s older nephew. Dad’s older sister, Joyce, and Dad’s mom were pregnant at the same time. Grandma Bea was pretty ashamed of that, I hear, and hid away for a long time. We have many great memories with that family. Travis seemed to have a smile as lasting as his energy. He was all boy, and so handsome. As a teen, he took his own life. Our family was so stunned and saddened by this. 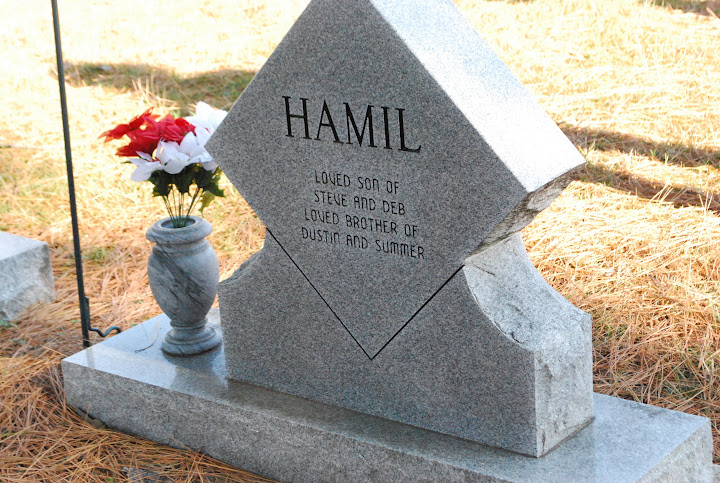 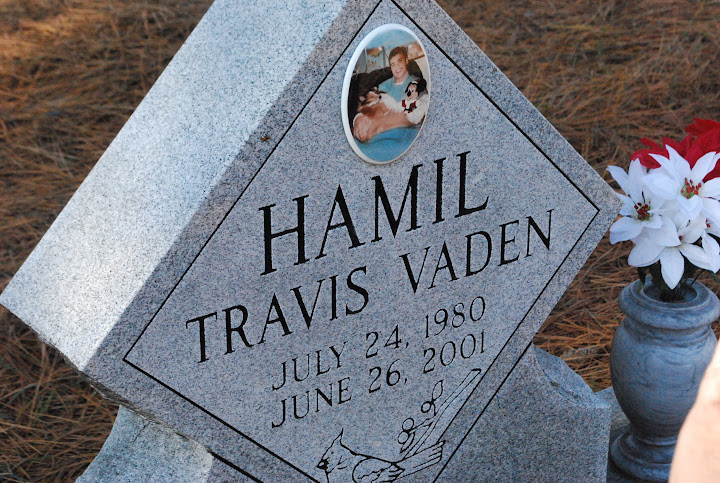 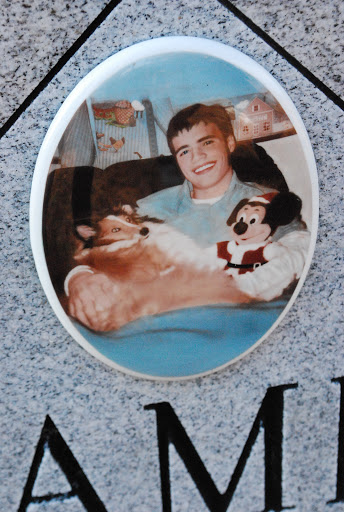 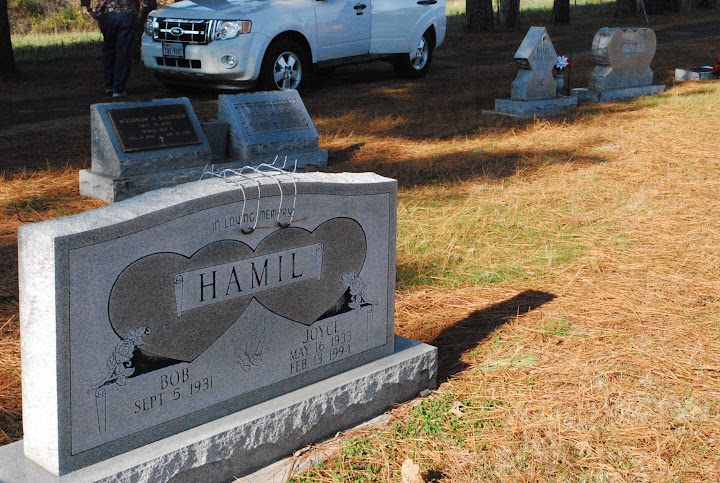 Here is “town,” down the street from Grandma & Grandpa’s home. It’s also way different than I remember. On the left, I believe, was the old soda fountain Mom and Dad would walk us to. 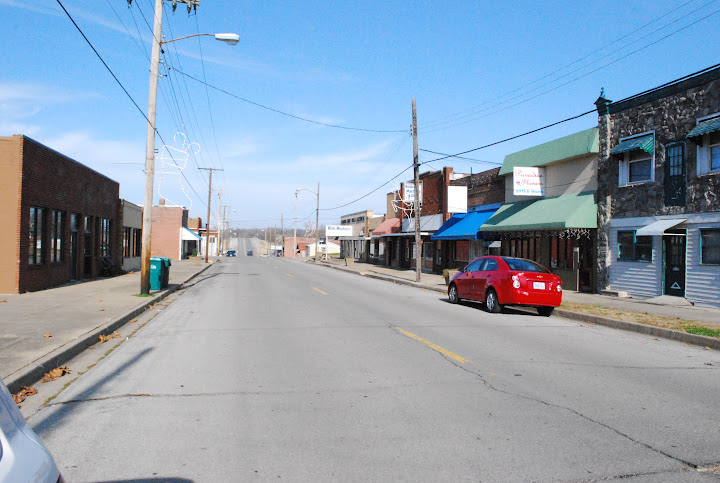 This may have been the church my grandparents went to before they became Seventh-Day Adventist. It shows, though, how the town used to be named Illmo. 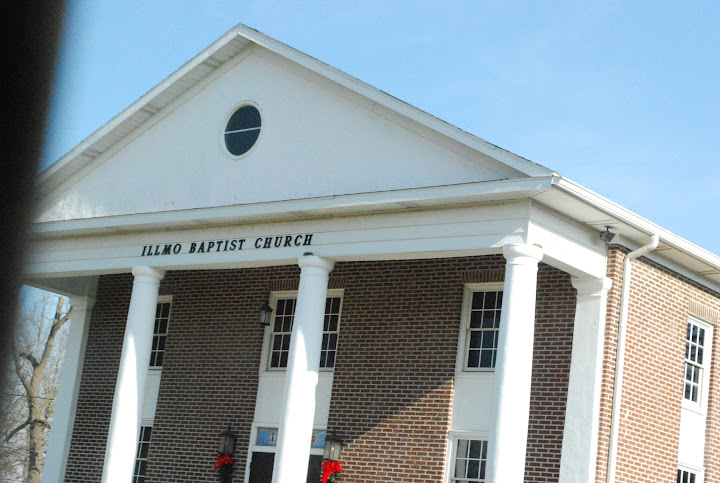 It’s funny how my memory operates. I have all kinds of memory of standing at the top of a hill, throwing drugstore airplanes down the slope. It was a ritual of sorts on our Missouri trip. We’d walk to the drugstore, get a soda and airplanes, and walk to this hill to play. However, I don’t remember what the hill or area looked like,whatsoever. I do remember a very long walk, and eagerly anticipating getting to the honeysuckle bushes. I remember the first time mom showed us  how we could magically pick a flower and pull a stem through the back and slurp up the nectar that came out. And that became a critical stop on my vacation checklist. Anyway, this is the hill. 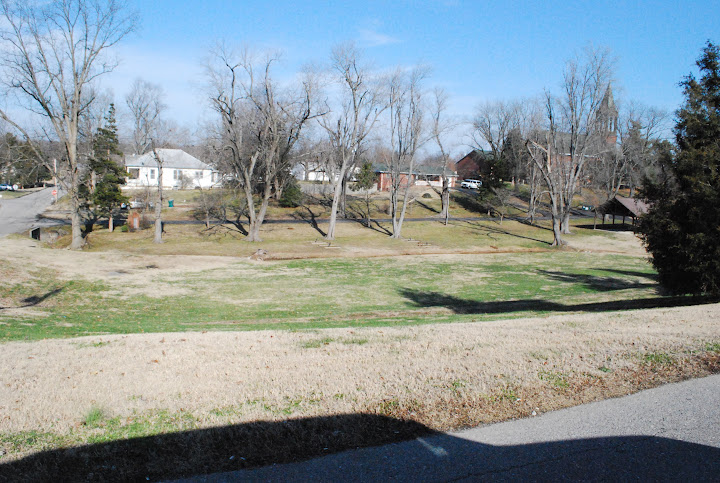 This was Uncle Jerry and Aunt Janie Skinner’s house. It was on the backside of “town”. I still marvel, looking back, at how nearby everyone was to each other. I recall really tasty food, the sweetest lady I think a person can be – to this day, a set of stairs that were no fun, because they went “up” instead of  “down”, and Uncle Jerry bragging about his star high school football player, Kandi. I thought she was cooler than Popsicles for playing real football on the boys’ team. Her “little” brother, Kris, seemed a hundred feet tall, and was amazing at basketball. 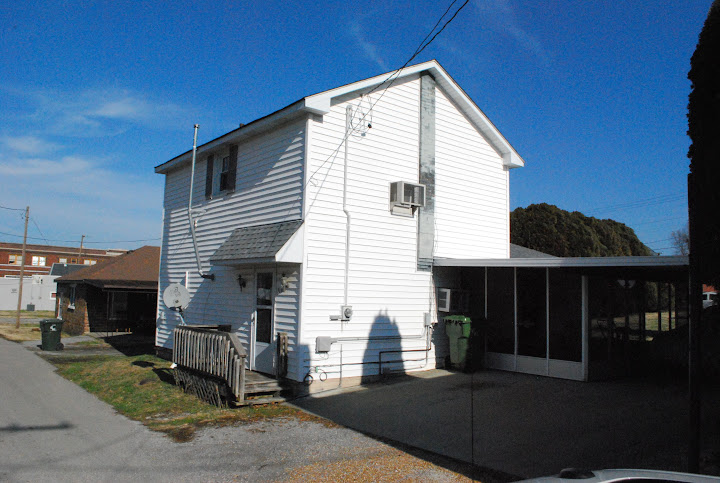 After visiting, Scott City, we headed to the party venue. To be continued…