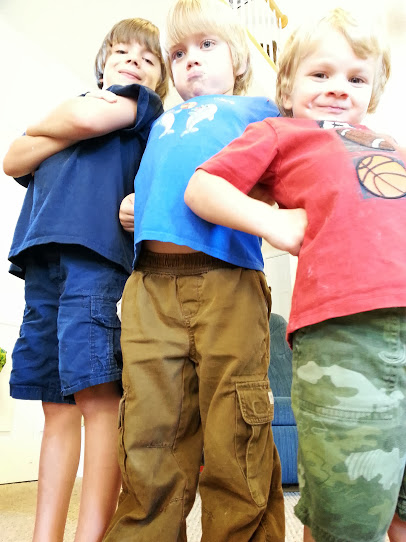 Today is another organically-unfolding home school day. We started off the day reading some books. The last book we looked at was a comic. After reading the comic, we started discussing the elements of a comic, the teamwork of artists, writers and editors, and the planning stages of a comic. Next, we learned how to fold a single sheet of paper into a mini-book, and Ian started making his own comic in the mini-book.

When Ian took a break from drawing, we watched an astonishing video of a 4-year-old playing piano. Ian decided that since he’s 6, he should be able to play better than a younger child, so he sat down to practice.

After lunch, we ran some errands, and while we were out, I thought maybe the local collectibles, toys and antiques store could tie in to our comic study. As we browsed, Ian recognized a number of brands and characters. We saw a cool historic display of coke bottles. The boys got to study a record player in action. Ian deduced that there must be a single, spiral groove in the record to cause the needle to drift toward the center during playback. We giggled at the “chipmunk” sound of a record being played too fast, and discussed the similarities and differences of records and Compact Discs.

Ian recognized old cameras and video recorders and examined how they may work. He recognized old irons, cassette tapes for music, a burr grinder, perfume atomizers (called them sprayers), old sewing machines and a spinning wheel, and a number of other antique items. He saw a slide projector and thought it was a video projector, but he thought it was very cool to peek through the slides.  The kid has a pretty good handle on gadgets old and new. They boys saw toys from my childhood, and many of today’s versions. They also admired the large collection of comics, and we discussed the comic-collecting hobby some people have, and the importance of the book’s condition and uniqueness.

After leaving, we hopped across the street to the newspaper office. The boys got to explore a few pieces of old printing equipment and I acquired a free “end roll” of newsprint. I also requested a future tour of their printing warehouse.

I asked Ian about some Unit Study topics, and he is interested in spending some time learning about sharks and submarines. I’m very pleased with how our school year is starting and excited for some of these upcoming projects. It’s so awesome to have an engaged learner!