We are now 7 weeks into dog ownership. Orbit is a good dog, and a big 77 lb doof. He’s progressing well in his knowledge of Fetch and has decided he does, in fact, like to vacuum.  He mostly prefers dried, wadded tissues, chalk, pencils, flour dust, stickers and cereal. He’s a carb junkie. But he never learns that it doesn’t agree with him. Those times that he managed to eat a half loaf of bread that he pried out of the bread box…not good.  Now, we have 6 or 8 very clear ideas of how dirty the rest of our carpet is. He also loves to go on long walks (not so much by moonlight – he’s a little scared of the dark), lurch at squirrels, howl at sirens, sneak power naps on the giant foof chair, and dress up as “Amy’s Shadow.”

A friend recommended using a can or jar of coins to shake at him when he starts to play with the boys. I’ve done that a handful of times and now he mostly remembers to leave the boys alone when they thrash about the room and throw themselves at soft furniture. But, he really REALLY wants to join them. It finally occurred to me to try doing it when Orbit barks at the tall bearded man, who so threateningly uses his key to break into our house every evening after work. It took about 2 shakes before Orbit chilled. The next night, Orbit kept his protest to a growly, put-out “humph.” 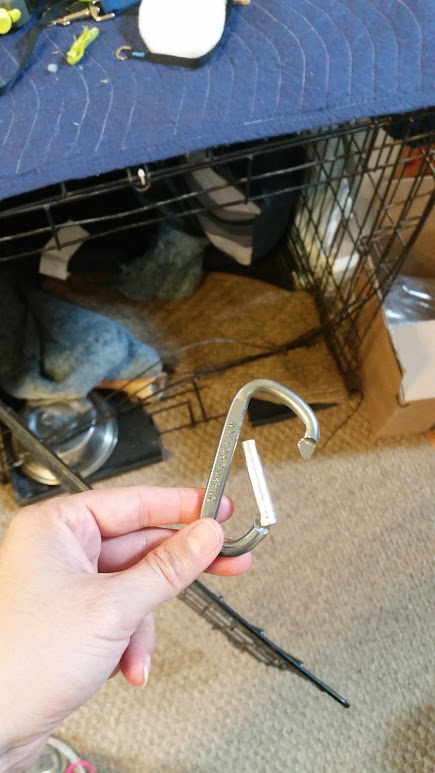 Brian still has a time trying to get a leash on Orbit. Last night, using some freshly-roasted turkey scraps, he got Orbit to stick his head out from under the table, enough to grab his collar and “coax” him out. Orbit tightly clasped his ears behind his head, as Brian applied the Nylon Maiden torture-walking device. It’s such a contrast to the high-stepping, face licking, body-wagging dance Orbit does when *I* get out his harness.

Orbit still escapes his crate. I have it held together with zip ties now, since he’s bent it and broken welds, and I kept the door closed with a caribiner. That worked for a bit, but he broke that caribiner and a zip tie. So, we’ve experimented with leaving him loose the last few times, and so far so good. Until we can replace the crate, we don’t feel right letting him scrape himself up trying to get out. After some time with aluminum can traps and mouse-trap-in-a-sack traps, he’s been leaving the trash and bread box alone. He does like his crate, as long as the door is open. At night, he follows me from bed to bed, tucking in the boys, then we go downstairs and he waits for me to tuck him in his bed. Goofy lunk.

The boys love him. He loves me. Brian is happy for us.