Ian is definitely his own boy. Yesterday in his Cradle Roll class at church, they were doing songs and activities related to the story of baby Jesus. The room was decorated with a simply-constructed manger scene in one corner, complete with plastic people and animal figures; a big star hanging from the ceiling overhead, and another manger scene on the opposite wall. While the children put felt angels on the board, he preferred to poke at baby Jesus in the manger. When they cuddled little lambs like shepherds, he danced with a plastic manger sheep. The kids each took a turn on a rocking horse, pretending to be the wise man on a camel. When it was Ian’s turn, he dragged his “camel” across the room to face the manger scene on the wall while he rocked. When the kids galloped around the room on one of those “horse-head-on-a-stick” things, he waved his high over his head like a NASCAR flag man.  And, of course, he had to be contrary about the color of every bell and instrument he was handed.

Late that afternoon, we took them to the zoo. We planned to be there just a couple hours, so we braved leaving the stroller in the car. Instead, we put on their little blue backpacks with optional leash attachment.  They did a remarkable job of staying nearby and the visit was further improved by the cool weather and the amount of people that left as we arrived (hey now, our kids aren’t that scary…). The parakeets landed on our seed sticks, the lions roared, the gorillas hammed it up, and the boys got souvenir smashed pennies of their favorite animals. We finished up just in time and were heading for the exit before the boys even got cranky of being there. It was the ideal day at the zoo. Then it was their turn to express to us the full extent of the joy they were experiencing at the zoo. They wailed all the way to the car and halfway home.  Finally, when we could get a word in edgewise, we reminded them of the friend’s birthday party we were headed to, and they once again found happiness.

We made it to the party, where once again Ian engaged in numerous acts of “normal toddler behavior”.  He couldn’t wait to give his friend the present he had so carefully chosen. He kept trying to drag it out of the gift pile — until he noticed the cake. The party had a fire truck theme and the cake was topped with an irresistible assortment of Hotwheels fire trucks. We got the cake scooted out of his reach and he grabbed one of the fire helmet party favors and stomped around with a stern look on his face grumbling, “I’m a fireman. Where’s the fire hydrant?” Everyone sat down to eat pizza and crunchy veggies. He faked us out by taking a bite of a carrot and chewing it indefinitely while he made a piece of food art out of pizza, an olive, and some ranch dressing sucked up a straw.

Clearly, he was scheming on dessert, because soon enough, the other kids had scarfed their meals and were ready for cake.  Onto his plate, he spat a wad of chewed carrot, and proceeded to eat a piece of cake the size of his head.  About that time, they handed out popsicles too.  You should have heard the maniacal laugh that burst forth from that child, as he grasped a popsicle in one hand and leaned forward to bury his teeth in the cake before him.  In the picture below, you can’t see the popsicle, but you might notice the complete absence of silverware and social grace. 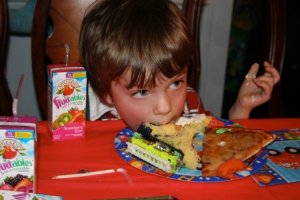 Finally, with his sugar high intact, he was able to turn his attention back to gift time for the birthday boy — after a good face wipe, that is. 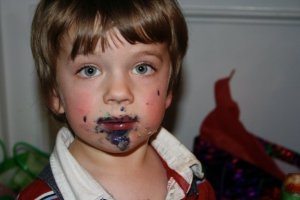 By the time we got home, the boys looked like they’d spent a rough night at a Kiss concert.  Black icing stains  enveloped their faces like smeared mascara.  I think last night they weren’t so much sleeping as comatose.

For some reason, this morning I decided to make a New Orleans breakfast of beignets and cafe au lait.  Maybe it was like one of those “hair of the dog” treatments I’ve heard of.  Within minutes, I had three guys stomping around the upstairs balcony, each with a hand over an eye and Ian growling “Bar be hearties!! [insert maniacal laugher]  We’re pirates!”  Brian yells “We’re in the crow’s nest!”  Ian corrects him saying, “Crows eat corn.”  Then a barrage of bouncy balls come tumbling down the stairs.  I think I’ll go take a shower.