I had a stroke of genius the other night. The boys were feeling rowdy and restless and were starting to attack each other in a feisty way. I dashed out to the garage and retrieved Brian’s and my Tae Kwon Do sparring gear, and padded up the big boys, and I slid some bag gloves on Elijah’s arms. They LOVED it and went.to.town. Here’s a fuzzy cell phone picture: 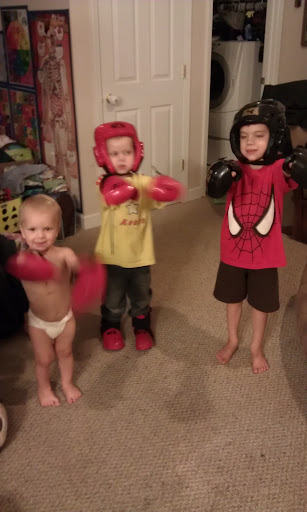 We had a mini-class on the three basic punches, control and fighting etiquette. Isaac listened and followed along intently. Elijah wasn’t far behind. Ian could barely contain himself.  They touched gloves and whirled away. Isaac held his form while Ian overwhelmed his opponents Tasmanian Devil flings of fury. Elijah zoomed all around, sounding as big and tough as possible. After a few minutes, Ian approached me, saying he wanted to “fight out of control,” which I translated as “I need to fight someone that I can hit as hard as I can.” So I went a few rounds with him. When Brian came home from Chicago last night, Ian couldn’t wait to fight him and show off his warrior self. They were incredibly cute, and I think we have a new hobby.