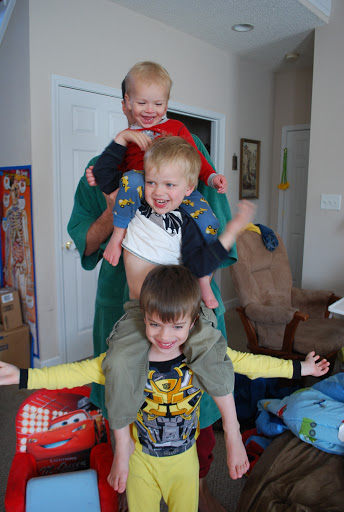 Today, we started the day with a chicken bone experiment. It was so enthralling (not) that I failed to take pictures, but I’ll describe it. I prepared for the experiment yesterday by suffering through some delish barbecue wings during my I-give-up-it’s-a-pizza-night meal. We examined the clean bones and discussed the roles of their components: Calcium, for strength, and Collagen, for flexibility. We cut open a bone and compared the strength and weight of the “spongy” bone to that of steel lattice structures. I wasn’t very effective at explaining acidity, but we smelled and tasted some vinegar and discussed the pH scale very briefly and remembered back to the reaction of vinegar, an acid, and baking soda, a base, in our volcano. As I placed the bones in a jar of vinegar, I stated that, as an acid, vinegar would be able to dissolve some of the Calcium in the bones. We reviewed what a hypothesis is, and I asked them to hypothesize what would happen to the bones if the vinegar dissolved the Calcium. They decided the bones would get soft. Now we will wait a few days before we get to check the results!  Most importantly(tee hee), I was able to make a plug for eating lots of green veggies and milk and cheese and exercising, to provide their bodies with enough Calcium and vitamins to keep their bones strong. I don’t know if they bought it. But, I do think Ian got the joke I made up for the occasion.

After that, we spent a large part of the day sitting on a blanket playing Legos next to the fireplace. Isaac asked me to make a car for his “punch man” (a boxer Lego mini figure). I landed in the precarious position of concentrating hard in the midst of growing chaos. That is almost always a recipe that brings out the growly lioness in me. I lost my cool a couple times this afternoon, and, to my pride and embarrassment, the boys schooled me on communication, managing to draw my attention to my behavior without igniting my defenses. The first time was during the Lego project. I snapped about something, and Ian said, “Mom, I still love you, even though you’re upset,” and I melted into a gooey puddle. The second time was after the boys had gone upstairs to play, and I had discovered what a wreck the playroom was, after all the work we did this week to keep the house together. I was back downstairs, and something they were doing inspired me to begin a lecture of some sort. As my rant began to crescendo, Isaac found a space between my words to matter-of-factly observe, “Your voice is getting louder.” I sat silently in awe of how effective that was at cooling my jets. I am frequently made aware of how much work I have to do on myself to model the self-control I want to expect from the boys. In spite of my failings, they never cease to surprise me. They are some cool little tigers.