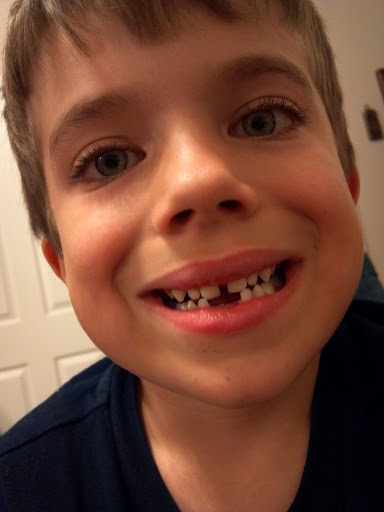 Ian, if you are older, or have invented time travel, and are reading this, the truth of the following story may sting a bit, but hopefully not too much.

Last Saturday morning, we were at the breakfast table eating waffles, when Ian started spitting and sputtering and expelled something from his mouth. “My toof cabe out,” he explained through a wad of Eggo. Sure enough, it was a little, peanut butter-slathered tooth on the napkin. I don’t recall ever letting teeth get that loose, that they could be displaced by a waffle. I worked at mine. He prefers to leave his intact as long as they remain.

Being a veteran of these things — this was his second loose tooth, after all — he explained to his brothers that he would get to put his tooth under his pillow and the Tooth Fairy would bring him money or a prize. Brian (Why, Brian? Why?) asked him which he’d prefer and Ian chose a prize over money.

Then, Ian made me nervous by popping some Rise of the Guardians movie-inspired questions. “Is Jack Frost real? Is the Sandman real?” Brian answered honestly. I guess Ian didn’t want an answer about Toothie.

Later on, when Brian was birthday shopping for our youngest, he came across some clearance Lego sets and picked one up on behalf of our fabled flying friend. That night, in our family bedroom, Brian and I whispered about who was going to do the deed, and I, grasping Brian’s ability to keep himself awake, volunteered. Most nights, I huddle under the blanket with my cellular Glow Worm anyway, catching up on some me time. A couple hours passed, and from what I could tell, our little toothless sleep fighter had given in. I got up, used the restroom, and sneaked the prize out of hiding. I crept toward the head of his bunk, and began to fish for the tooth, when I heard Ian’s head shift suddenly. I panicked and skitter-toed back to my side of the bed, tripping on Brian’s leg, which was thoughtlessly dangling off the bed and across the walkway. I crammed the prize inside a nearby pillow and slid into bed, holding my breath. Ian shifted around for another two hours before I heard his sleepy breathing pattern set in.

At this point, Brian stirs and begins to inquire in a less-than-whispery voice about the mission. I interrupt that Ian has been fighting it, but may be out. NOW, he volunteers to do it, and I hand him the prize-laden pillow. I couldn’t see what happened next, due to blackout curtains and severe Myopia, but he was not at all light on his wings. Fortunately Ian slept through the commotion. We awaken the next morning, and of COURSE Ian is still sleeping. Had we waited until morning, he would have been the first one up, and sorely disappointed.

I see that Ian’s head is bizarrely propped up, like he was tucked in by ogres. I had intended for Brian to remove the Lego box from the extra pillow and set it near Ian’s head, instead of the whole contraption being smooshed under his head, but okay, it worked. I asked where the tooth was. The reply was, “…Oh,” as he retrieved the tooth. Fairy Dad needs a little more training. (And thanks, Mr. Tooth, for letting me giggle at your expense.) Needless to say, Ian awoke, hunted around his pillow stack, and spent a bewildered moment trying to make sense of the lump in his pillow. When he pulled out his prize, he very excitedly pronounced, “I STILL believe the Tooth Fairy leaves a prize under my pillow!”

The next day, as Isaac was saddened with fairy envy, Ian offered that he next time he had a loose tooth, he could put it under Isaac’s pillow. I adore the brother love, and I fear we have set for ourselves a most inconvenient precedent with the tooth prize. Perhaps we could approach it like a toothiversary. First tooth: cotton paper. Second tooth: ABS plastic (Lego). Third tooth: nickel-copper alloy, and so forth. Think it would work?