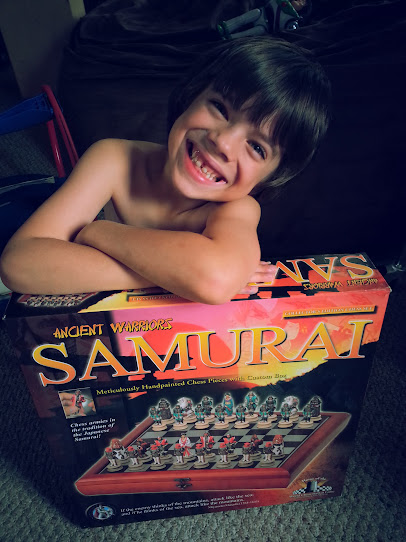 Yesterday (or was it Sunday?), we started our first day of *official* First Grade home school. Sunday, I submitted our online Declaration of Intent. I’ve had some apprehension about the start of school, being so torn between not wanting to do “school at home” and feeling pressured to stick to some standard objectives. Allow me to clarify. Yes, there are things a first-grader typically knows by the end of the school year. I’m speaking of a difference between hovering over him with a checklist and attempting to dictate what he will learn and when, versus providing an enriching environment and allowing a variety of learning experiences to unfold organically. I think these first two days are a good example of the latter, and I feel God has blessed our endeavor to connect as a family and encourage a hunger for learning. Brian has also been a fantastic support and a source of comfort and sanity (I must also give a shout-out to my friend, Heidi, for offering much of the same through her own home schooling experience – thank you, girl! I’m keeping you on speed-dial…).

I hinted at some Sunday activity counting towards school, because we played 3 hours of Monopoly. The boys get that type of attention span from Brian. That is not a game I can usually stand to sit through. Monopoly smoothly works in some counting skills, as well as money handling & counting, negotiation and strategy. Brian even managed to work in a little history of the Depression era.

Monday, by Ian’s request, we played and hour and a half of chess. He knows how the pieces move, and I help him talk through the benefits and consequences of certain moves. He actually makes some fairly strategically-sound decisions. He then changed up for an hour of an educational animal game. 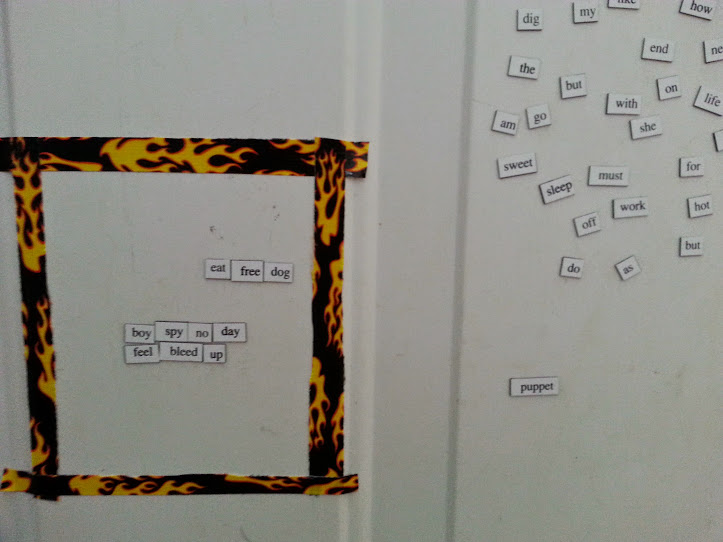 Another hour breezed by between an art project and his piano practice. He’s really getting the hang of  musical note values, and has recently transitioned to reading his music on a staff. Next, we spent 15 minutes on an invented word game. I have magnetic words on the front door. I used  flame-printed duct tape to mark off a small square on the door. I then encouraged him to find words he could read and if he read them correctly, he got to put them in the “fire box.” He knocked out 10 words before tiring. He ended up taking a seat on the stairs and noticed the clock. We then spent another 15 minutes talking about time.

Today we spent 30 minutes reading and discussing a bible story, including its spiritual lessons and historical/geographical context. They spent a few minutes playing while I cleaned up breakfast and thought up the next activity. 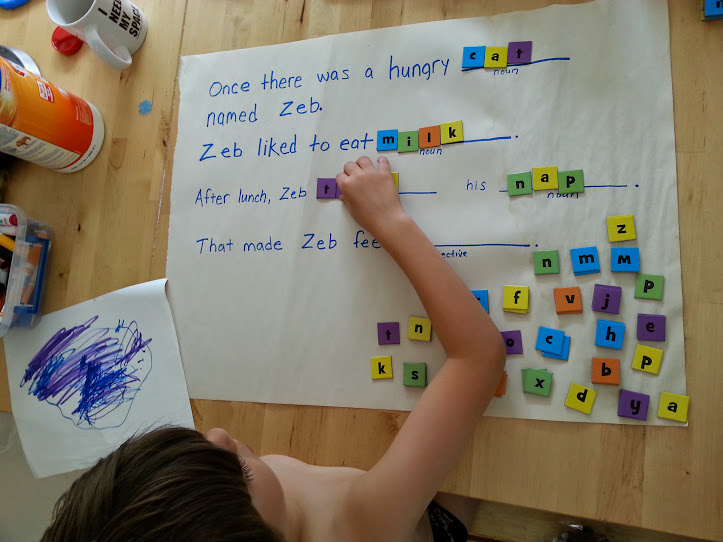 I took a sheet of newsprint and wrote a brief Mad-Libs-style story on it, leaving blanks for Ian to fill in. I also made an easier one for Isaac, who wanted to play too. Elijah entertained himself drawing and playing with Play-Doh. I assisted him in reading the story and set out letter tiles so he could first “build” his words to fill in the blanks. He read the story through each time he added a word. I was amused that he chose “energized” as the last word to sound out. He got all the letters correct, though it wasn’t obvious to him that the first two “e”s belonged in the word, when sounding it out. After he had built all five words, I had him scoot the tiles up so he could then write the word on the line to make his story “permanent.” 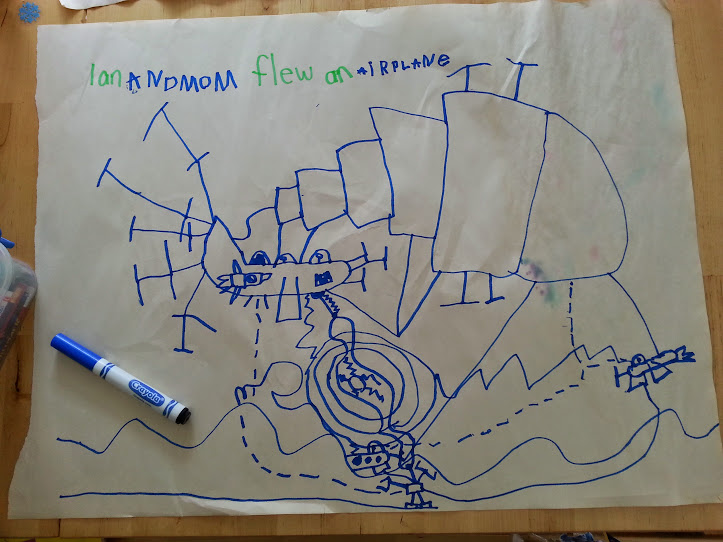 That activity evolved into another game, where we made a “cooperative” one-sentence story. We alternated writing words to the story, then he illustrated the event. To try and interpret, this is a picture of Ian and I flying an airplane that has a giant telescope coming out of the top, and many propellers to support the contraption. I am looking through the telescope at an airplane and he is looking at a submarine that Isaac is in. There is a robot providing communication support to both vehicles. I’m impressed with his attention to detail.

For the rest of the school day, we played another hour of chess, read for an hour, and Ian and Isaac played a sequencing game for an hour.

I don’t intend to post a daily update, but I wanted to record our start (I have, however, created an album where I’ll keep snapshots of some of our projects). These non-standard methods of learning may scare some who are used to the typical classroom approach, but I have confidence Ian will excel. I think it’s pretty great that he doesn’t realize this is education. I like to call it “ninjucation.” Some days will look more school-like than others, but his experiences will be vast and varied and he will have a well-rounded understanding of life and (if I don’t inadvertently squash it) a perpetual, intrinsic love for learning.