Aaack, my brain is melting! No, not hurting, just melting. Too much “adventure” lately. The toddler-people have trampled me and chewed holes in my clothes. I have loads of catching-up to do, blog-wise. I wanted to do a cute story for every event along the way, but catching child-vomit in cloth diapers for the last two weeks has wanned my interest.

March 17 was our 10-year anniversary. We would have liked to make a big whoopdie-doo about it, but so far we are still rich only in love. So, we took the babies to the Wolf Lodge in NC for the weekend.

Ian was big enough to ride all but one slide, and the smaller two were fairly content to play in the kiddie area. Ian was a little nervous on his first slide rides, but in short order, we had a hard time getting him to wait for us to accompany him up the stairs. His favorite was a mat slide that twisted and turned through enclosed tunnels, before emerging into a downhill, wavy slide. I was watching Ian and Brian “race” and was really amused watching Ian emerge first, drifting slowly down the straight-away, as Brian’s greater mass tore past him a quarter of a minute later. By the time Brian was up and off the slide, Ian was still milking the lazy ride to the finish. He would not get up until his mat hit the end, no matter how long it took, so we’d get up, cross to his lane and give his mat a boost.

The kiddie area had two very small slides, lots of buckets spilling, buttons to push, cords to pull, and four jet ski ride-ons, which didn’t move, but they squirted water. The water was about 18 inches deep, so the boys could move around in it fairly comfortably. Isaac really took about a day to get comfortable, even in this area.

There was a big fort area with a lot of fountains and buckets and slides and such. The big attraction there was a giant bucket that would slowly fill with water and then tip and thunder water down on anxiously-awaiting thrill-seekers.

The lodge had plenty of other attractions too, such as an arcade, food court, shops, and more. The boys REALLY wanted to do the magic wand game. It was a fancy wand outfitted with RFID that would interact with displays around the lodge. It was very pricey, but pretty cool. Maybe when they’re 8.

It has been SO gorgeous outside! Nearly every day, I’ve been tossing the munchkins outside for their Vitamin D, and whatever adventures they can conjure. I managed to get them all three in the same place a the same time and snapped a picture. 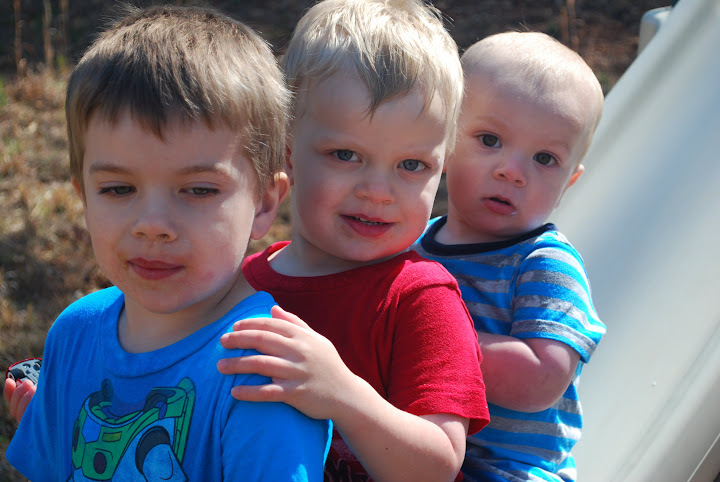 Ian was pretending to be the animal rescuer, Diego. I asked him what animals he was going to save today. He started to think about it and then stopped suddenly and alerted me that he heard a “squeaking in the bushes.” I asked him what it was, and he exclaimed, “It’s a baby harmonica! I’ll go save it!” I have no idea if he was being confused or funny, but I thought it was hilarious.

Just before his birthday, on the 30th of March, Isaac started up with a stomach bug. He was miserable for a week. We didn’t get much sleep, and he wanted to be held most of the time, or lie and watch TV. Poor guy. I felt so badly for him. His birthday arrived and he decided he felt like opening presents. I hadn’t done anything about a cake because he kept saying all he wanted was a cookie – and not a big cookie cake, “just a little cookie”. We went to the store to pick up some refrigerator cookies, to make it easy. I pressed him some more about his wishes, since “just” a cookie didn’t seem very celebratory. Finally, he decided he wanted a cookie train, so I grabbed a few types of cookies and threw together a cookie train, as he finished his specially-requested Pad Thai. 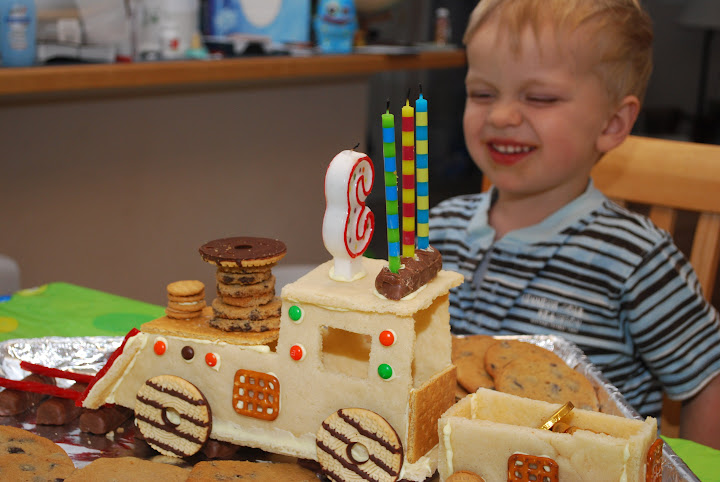 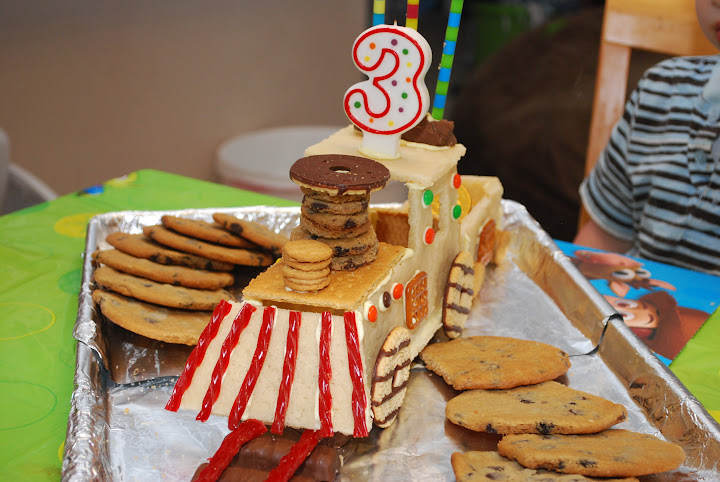 I think he got some very cool toys for his birthday too, including a robot crabby, a recycled blue race car, a Duplo truck, some stacking robots, a YBike Extreme, a Plasma Car, and a double-sided art easel.

That night, Isaac seemed to still be feeling a little under the weather. I thought I’d try to cheer him up with some words of affection. I sat with him on the edge of the bed, uttering praises to my birthday boy, confessing the depths of my love and admiration for him. At the end of my spiel, he breaks the silent pause as he deadpans, “I’m Batman.”

The very day Isaac felt better was the same day Elijah spent the night throwing up. I remember marveling at my magical mommy ear, perhaps to distract myself from the fact that the only thing that I find more traumatic than vomit is a roach encounter. I clearly was sleeping the three hours between his upchucks, and he did it very quietly, yet somehow I managed, every time, to know it was coming and slide a cloth diaper under his cheek to catch his gastric offerings. The next day, Friday, he wanted to be constantly held, so the house continued its rapid descent into grossness. On Saturday, he seemed back to himself, and I commented on the marvels of breast milk.

Sunday, we headed up to see Fernbank Museum, but shortly after leaving the house, Elijah yelped and cried from his car seat. I thought he’d hurt his sensitive teething gums on a pretzel stick, but a couple minutes later, his right eyelid was swollen almost shut. I thought maybe he poked his eye, so we kept driving and watching. An hour later, it didn’t look any better, so I dropped the guys off at the museum and I took Elijah over to the children’s hospital to be examined. They said it was an allergic reaction to something, and gave him a really expensive dose of Benadryl. I picked the guys up shortly after the museum closed for the day, whining a little bit about having missed the fun and second-guessing my precaution. But, we decided he’s a “weird” kid and deserves a little extra caution. Sunday night, just to throw us off, he threw up once again, and has done so once every morning and night since then. Last night was the exception, but he was back at it this morning.

On Monday, his eye looked better, and he was still “acting” fine, so we continued with our plans to take the kids up to a member night at the Botanical Gardens. At the entrance, I tucked my camera carefully into the folds of the stroller canopy, and held the strap against the stroller handle. Then the stars collided. I got a text message and reached into my pocket at the same time that Isaac decided to cop an attitude and slam his canopy shut. My camera flew to the ground in slow motion, as I howled, “nooooo!” The lens mount snapped at its little plastic parts and thus body and lens flew asunder. So, enjoy my delightful cell phone pix of the event. 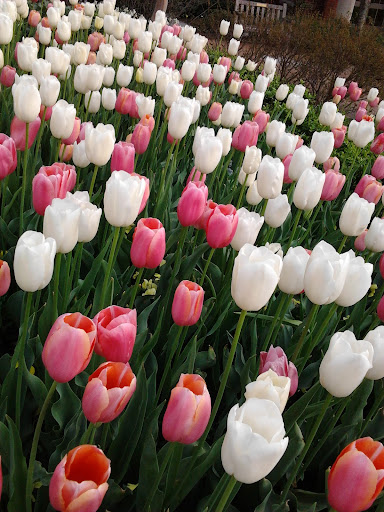 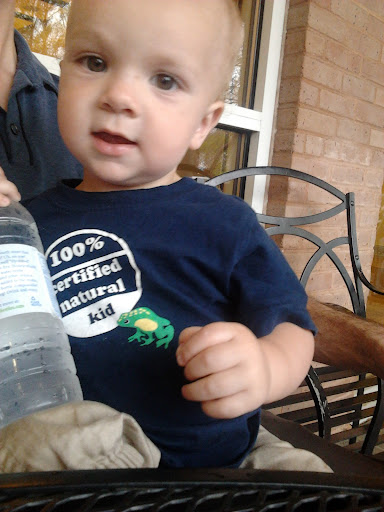 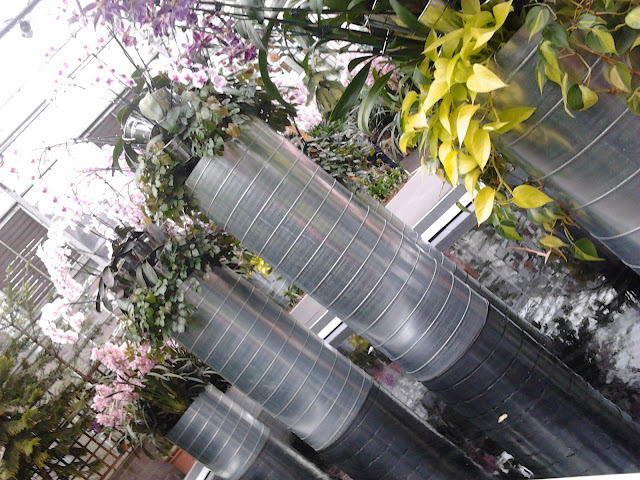 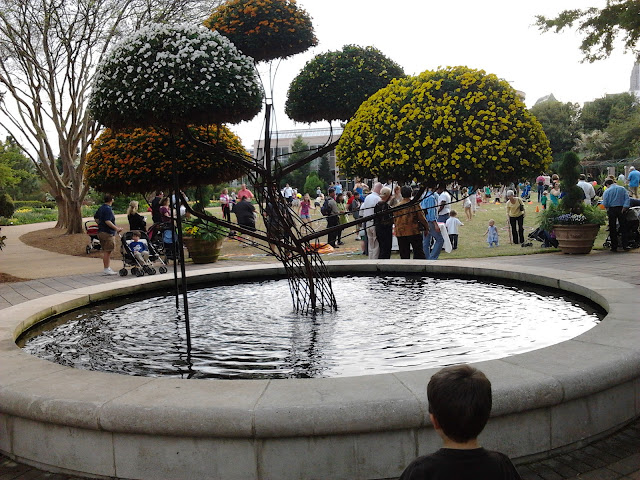 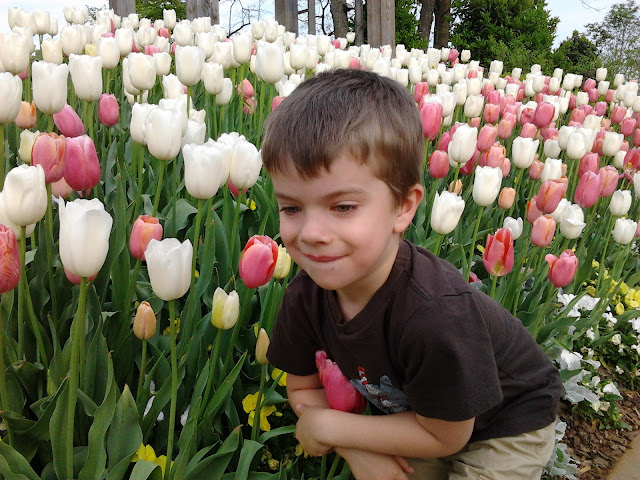 At the gardens, I had to make a mental note on giving the boys further instruction regarding interacting with strangers. Isaac, giggling with delight as he ran on the new bridge, slowed just enough to get his paws on a seated group of ladies, while saying, “tickle tickle tickle!” and zooming off. I’ll also have to address the “who can yell ‘toot’ the loudest in Kohl’s” game, but that’s a different story.

Welcome back to today. Elijah has his morning vomit (please let this bug pass soon!), and we head to the kitchen to eat some rice. Yes, the under-appreciated breakfast food – great with eggs! I cleverly sit outside with Elijah, and we tear up a bowl of cheesy rice. Ian saunters out, proudly displaying a plate of rice he made for Elijah. I insufficiently instruct him on what to do with the plate, and shortly after, Elijah finds it and trails it everywhere through the kitchen and out the back door. While awaiting it to dry sufficiently to sweep it up, I get Elijah down for a nap. I emerge to hear the doorbell ring.  Oh, crumbs. It’s the bug guy. Mr. Phil is extremely nice, but I wonder how many times he’ll buy my various desperate attempts at explaining away why my house looks so trashy. Really, truly, I DO clean my house. How does he always show up when I’m feeling most grossed-out by my own house?  I don’t even put him on the calendar. I just know if there is some chain of events that leaves my house looking particularly nasty, it’s bug-spraying day.

I quickly try to vacuum up the rice, wishing desperately that at this moment, the boys would do their fancy, havoc-y thing that they do so well, to vindicate me as the overpowered mother of three tornadoes, instead of sitting sweetly together like angels, children of a clearly lazy and apathetic princess-mom who utters ridiculous notions of effort. Mr. Phil gently informs me of a $3 price hike due to gas. I sympathize with him about the cost of gas and huff about fuel speculation. “How do you know about speculation?!” he replied with a disappointing level of surprise in his voice. He then continued with, “And that’s not all it is now.” I interjected, “You mean, Libya?” I tried to be nonchalant while helping hoist his jaw off my sticky floor. See? Princess Pea isn’t as dumb as she looks. OK, I’m having a little fun with this; He wasn’t condescending, but it felt good to have at least a little bit of my pride restored.

Elijah gets up a little bit later and another chain-reaction erupts. I suppose I shouldn’t be amazed, but these three boys frequently end up pooping within moments of each other. As in, if we had only one bathroom, we’d probably have frequent accidents. So, I get two big boys situated on their respective potties, and hear a familiar sound rumble from Elijah’s pants. Isaac was unusually down-to-business, and was immediately hollering, “I need a wiiiiiiiipe!” I get him cleaned up and positioned at the sink. I hold his hand in front of our new soap dispenser, and depress the pump, sending soap straight into his eye. I swoop him up and dash him to the tub in our bathroom, trying not to breathe through Ian’s fog. I try hard to brace Isaac in a way that water gets only in his eye, but he thrashes, and rubs more soap from his hand into his eye. I rinse his hand and keep trying to isolate his eye, but, he wiggles and writhes, getting water up his nose, down his back, and everywhere in between. Ian the Empathetic, buries his face in his hands, cringing at the site, patiently waiting for his cleansing. Finally, I have to close two wailing boys out of the bathroom so I can tend to Ian’s bottom, unmolested. I emerge and have one remaining crier tugging at me as I change a diaper. May I go back to bed now?