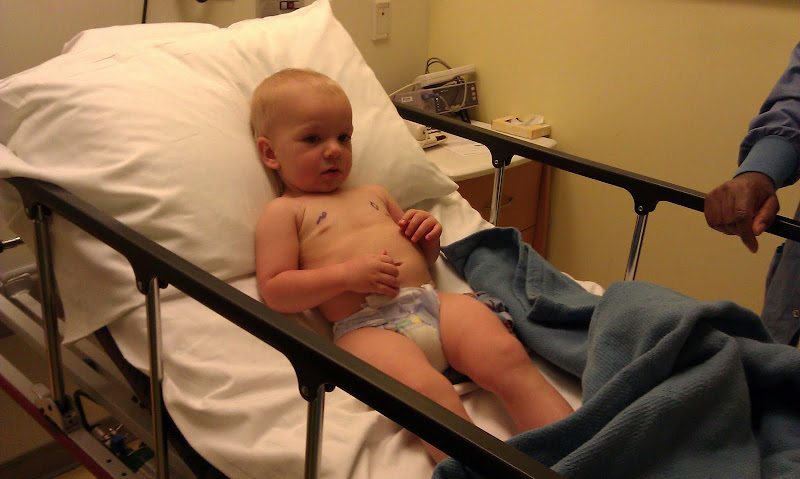 Today is the day we celebrate Elijah officially being a normal, healthy boy, finally free of all physical “ties” to modern medicine. He had his surgery this morning to have his mediport removed, and he did great!  We weren’t thrilled that he had to wait two hours past his scheduled time, but were forgiving because we know each child is getting personal, specialized attention. We asked about the old, gnarly CVL scar on the other side of his chest, left by a resident during the removal of his central line. The doctor said it would always be ugly, but that she could easily fix it with no significant distress to Elijah, so we consented, since she did such a beautiful job with his first port incision.

During times of distress, Brian and I frequently turn to inappropriate humor. A very nice, intriguingly-accented young surgical intern came by to get our consent. She asked if we knew the risks and we confirmed that we did. She asked us to tell her what they were. We took turns listing outcomes such as death, infection, respiratory distress, and pneumothorax. She was satisfied with our knowledge, and as she was turning to leave, Brian took the opportunity to proudly share his pun, announcing that our son would finally be “de-ported.” She giggled, congratulated us, and left. I “thanked” Brian for killing my opportunity to discuss her fascinating accent. “What was I to say? ‘Speaking of deportation, where are you from?'”

After she left, we continued to rattle off ridiculous side-effects:

Me: Alopecia. Rhinitis.
B (teasing me again for my use of medical terminology): Pneumothorax. Yeah, doc, we’ve seen our share of pneumothoraces.
Me: Diaphoresis
B: Eh, ya gotta dia-something.

Elijah passed the time throwing and rolling a ball we brought, drawing on the nurses’ white board, and mimicking the toilet sounds he heard through the wall: po-weeckkkk, he’d say with a grin after every flush. Finally, he had his pre-surgical dose of Versed. Within five minutes, his eyes started glazing over and he started giggling about fingers and chair texture. An hour later, his giggles were getting confused with moans of boredom and he was drunkenly pointing to the door. Brian kept him occupied for a few minutes, pretending to leave with him and come back again. He wavered between laughter and tears, until finally his chariot team arrived. He found it interesting enough to sit on the propped-up bed and give “go” commands off to his destination.

We grabbed some to-go BBQ from the cafe and ate it on kids’ lap tables back in our room and had a prayer for Elijah. We vanished into the internet machine, occasionally discussing the miracle of near-instant communication across the country or the oh-so-exciting gas-and-sub station being built near us. After getting the call that Elijah would be returning soon, we couldn’t help but prairie-dog our heads out the door each time we heard a familiar sound. Finally, our boy came back, sweet as an angel. He stirred enough to try sitting, and as I lifted him, he pointed to the recliner with a grunt, clearly ready for his mama milk.

He visited his “old” NICU for a few minutes, acting unphased by his celebrity, as he slurped an ice water. Back in the car, he pouted about being stuffed in his seat. In fact, he wouldn’t get in his seat at all, until I asked if he wanted to go see Ian and Isaac. Then he said “mmm-hmm,” and reluctantly complied with being buckled in.  By the time we got home, he headed straight for the table and ate someone’s leftover cereal and crackers, then was off to the races with his big brothers like nothing special happened. Thank God for our healthy boy!