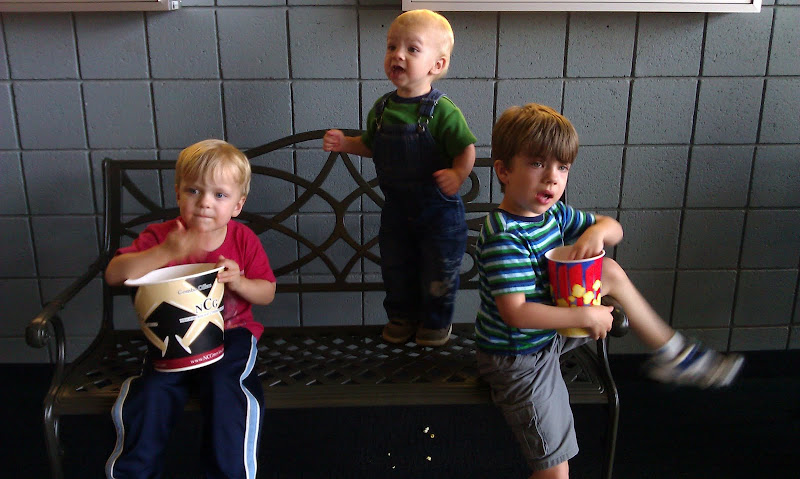 Knock knock. Who’s there? Boo hoo hoo. That was Ian’s recent attempt at a knock knock joke, followed by: Knock knock. Who’s there? Nick Knock. I’ve been waiting for the moment the word play light bulb switches on. I tried the other day, when the boys were munching “salty garlic olives.” I said, “Hey, Ian. Olive you!” Silence. ” Ahh-luv you.” Silence. “Get it? It’s like ‘I love you’….o-live…you.” He laughs with delight. “Hey, mom! I olive you!” “But, aah-luv YOU!” I reply. After a few more tries, I start to think he “gets” it.

Later, Ian sits down at the table with me and decides to strike up a conversation. “So,” he starts, “how does it feel to be old?” “What?” I ask in disbelief. “I saaaaid (almost hollering)…how does it feel to be really old?” “Well,” I concede, “I really like my age, because it means I am the mommy of a silly four-year-old boy, and I really like that.” He dashes off to watch a show, and during an infomercial, which he’s particularly susceptible to, he, excitedly decides he wants to buy me a scooter chair. That’s it. I really AM going to ban the TV.

Elijah has been practicing his own “sensitivity.” He found a little stroller in Toys R Us and pushed it around the entire store (and I mean a preschool-speed trek up and down every aisle), with a little bouncy ball in the seat. I bought it. Anything that can keep him occupied that long must be ours. At home, he immediately loaded the seat up with Hotwheels cars and took them for a few spins around the house. Then he found a stuffed puppy and gave it a ride, before parking near my chair, un-“buppo”-ing the puppy from the safety belt, and climbing in my lap for a quick nurse. He paused to give his dog a little nurse at my breast too, before hopping down for another circuit.

Isaac was enjoying a bed time story with dad. It is a little rhyme about a baby whose big sister is very nurturing. It is staged in a sweetly-decorated nursery at night. The rhyme starts something like: This is the baby who cried in the night, who woke up his sister, who turned on the light. It goes on to detail how she holds and plays with him until mom comes in with a bottle (why mom would choose to do anything but roll over and pop a boob in his mouth is beyond me. But that’s wayyyy off topic.). At the end of the story, Brian, thinking he’ll cleverly invoke and capitalize on a little healthy jealousy, points out, “Isaac, look! Did you notice that little boy has his very…own…room?!” Isaac, thoughtful and quick-witted as usual, quickly replied, “Yes. And he CRIED.” Brian dutifully took his big fat zero.