[Yes, this has graphic lip wound pictures, but I’ll be nice and put them at the end.] 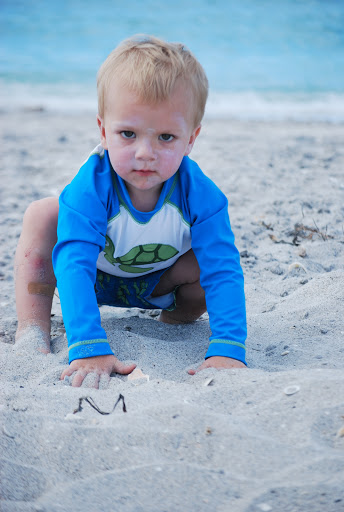 Not to be outshone by the birthday boy, Elijah took a tumble from the kitchen table, right at birthday cake time. I was on the other side of the table and didn’t see most of the fall. He ultimately landed on his back, so I was surprised to see blood on his lip when Brian picked him up. That was my cue to step in.

I started mopping up Elijah at the sink, while Brian stood at the freezer, disguised as frozen cauliflower, trying to find the ice. Yes, I am lovingly poking fun at his intense discomfort with wounds, as I will feel the same way, come time for the billing department’s part of the procedure. He will handle that with confidence and grace. I mentioned his lip was going to need stitches and Brian began an intensely dedicated aimless search for nothing in particular. I asked for a paper towel and Brian grabbed one and began cleaning the floor. I rephrased my request for a towel, specifying it for Elijah’s lip. While I iced Elijah’s lip, I sent Brian on a hunt for my shoes. I then tried to send Brian to find bandaging supplies, but, knowing they were scattered in various closets, I urged him to take over the icing duties. I found what I needed just before the last of the color drained from Brian’s face.

While I adhered folded non-stick gauze pads to Elijah’s lower lip and chin with a Tegaderm bandage left over from his central line days, Brian made the requisite phone calls, including asking Emily to escort Elijah and I to the children’s hospital. The three of us got to the hospital around 21:30, while Brian tried to keep things normal at home for the big brothers. Emily’s help was invaluable. She’s comfortable at maneuvering  in a hospital, and was great company to both of us. We knew, from Brian’s “head’s up” call to the ER that we would want a plastic surgeon, but, unfortunately they can’t or won’t page one until the ER doctor examines him. So, we waited, they paged, and in surprisingly short order, the Oral Maxillofacial resident arrived, having completely forgotten to pack his bedside manner.

Elijah had been enjoying, or rather, we had been enjoying Elijah on a dose of Versed. He giggled and held his arms in the air, studying his fingers. He handed Emily what he said was a little Green birdie in his little empty cupped hands. He slurred a friendly cowboy, “Hello!” to the nurse he had formerly sneered at. He marveled at the various monitors and tapes the staff applied to his body and limbs, like maybe they had gossamer dragonfly wings. He didn’t seem to mind the paramedic trying a couple stabs at an IV, since they had numbed the area. We gave him a kiss right after they knocked him out with a squirt of Propofol, and left to get a drink while “Plastic” sewed him up.

They were fast. I caught the surgeon at the nurse’s station as we returned and he offered instructions. Being as late as it was, and as drugged as he was, Elijah probably would have been down for the count, but we needed him to be alert to be discharged. The nurses had to resort to cold spray and ice to get his eyes open, and he greedily accepted and devoured a popsicle.

Finally, we were on our way home. Elijah kept his hands off his lip, but was exploring with his tongue and upper lip. About 10 minutes down the road, Emily noticed a problem. We took a close look and saw the bottom stitch — the most important stitch — had come out. The vermilion line is where the face skin meets the lip skin – and it’s important that a lip is sewn with everything lined up perfectly. So, I swung the van around in a very disappointing U-turn. Emily called the ER back, and when we arrived, there was a nurse on staff that she knew, and she was very helpful in getting us back to a room quickly.

The surgeon was called back, icier than ever, if it were possible. He wasn’t outright nasty, but  barely acknowledged us and disinterestedly mumbled when he spoke. The ER doctor thought the lip might still be numb from the first go, but had me hold some Lidocaine on his lip, and they gave another dose of Versed. We wanted to avoid another sedation. Plastic Man had me hold Elijah in a reclining position on my lap. He started to stick Elijah with the suture needle, but his lip wasn’t numb, so Elijah startled. I hadn’t expected him to feel it, but Dr. Plastic scolded me to hold him still. It went through my mind that “a stick is a stick,” so it might as well be a suture stick that would hurt as bad as a numbing shot. I braced Elijah tightly and Doc quickly tied the stitch and applied some glue.

Elijah happily nursed immediately afterward. Sadly, the surgeon and a nurse encouraged me to wean him because they thought lips were heavily involved in breast feeding. I explained that his jaw actually relaxes, his lip flips gently out of the way and his tongue does all the work. The surgeon came back a bit later to see how his lip was holding up from the nursing, and as I expected, everything was fine. I’m discouraged to think how many mothers would be unintentionally misled into weaning, though. When Elijah smiles or cries, it stresses his lip far more. He didn’t fuss a bit about the latch, and was actually very content.

Elijah really wanted to just nurse to sleep, so he was peeved when we got him up to dress him and get in the car. He was wide awake all the way home, and just wanted to watch a Dora movie. We got back to the house, shortly after 04:00, a whopping 10 minutes after Emily’s erroneous prediction. Emoticons don’t belong here, but mentally insert a playfully sarcastic grin. Before crawling in bed, I taped a gauze square just under his lip to protect from any accidental scrapes or bumps in the night. He slept surprisingly well, and today, we are doing our best to keep his feet on the floor, as he wants to be back to his normal rowdy climbing and jumping routine. He happily ate his slice of birthday cake for breakfast.

Now, the moment you have been waiting for, either to make a quick exit from this page or to enjoy some really cool lip wound pictures…Here they come.

The first fix, three stitches. Sorry — a little out of focus.

And, last but not least, here is his gobbling a popsicle.