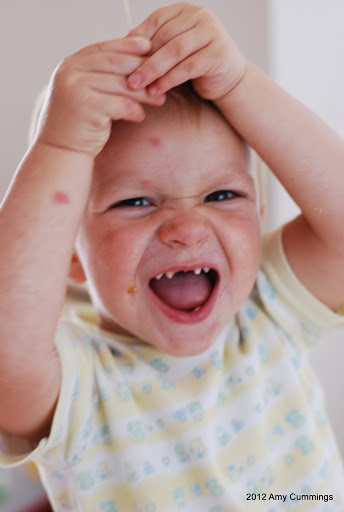 Yesterday in Walmart, Elijah “just happened” to see a pack of Thomas the Tank Engine underwear. He pulled them off the shelf, telling me just how much he wanted them. I asked if he could keep them dry. He said he could, so we took them home.

Elijah will be 2.5 years old next month. He’s at that stage of potty training (not that I’m playing a very active role in his training) that is hardest for me to deal with. It’s the part where I consider him technically trained, because he knows when he needs to go, and where he ought to go, and how to accomplish all the requisite steps with little or no assistance. Now he just has to choose to prefer the potty.

He selected his favorite pair of underwear out of the pack and put them on when we got home. He didn’t want to take them off at bedtime, so we put him through the same bath-jammies-brushing-drink-potty routine as the big boys. I opened our first pack of GoodNites Bed Mats and slapped one down on our bed, hoping I lined it up right. Elijah stayed dry until 9 a.m., and then…not so much. He groggily voiced his surprise, “Mom…I don’t have a diaper on…” Well, the mat did its job.

He put on a clean pair of underwear, and wore them for a few hours, then peeled them off and asked for a diaper. Here’s the part that kills me. I asked if he’d rather I help him to the potty, but no, he wanted the “full service” poo. I put the diaper on and said, “There you go. Enjoy your poop.” He said, “Okay, mom,” and ran off to a corner of another room. Half a minute later, he runs back in, “I’m done booping now, mom. Keen my bants.” All I can think is, Nice, another $.35 poop.  I could be wrong but, I think  that diaper just cost $42/hr.