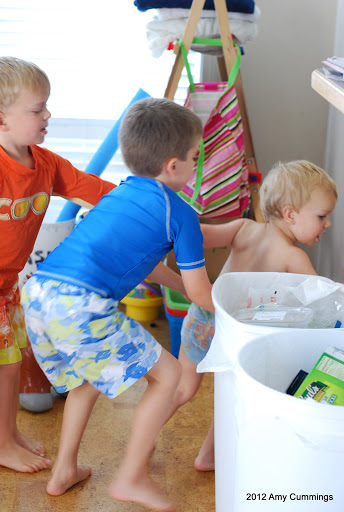 I’m having inertia issues. It’s been so long since I’ve blogged that I don’t try because the “catch-up” is too intimidating. I have an anal desire to have all the events of interest over time logged, as to forget none of the cute toddlerisms or preschool milestones or family adventures. I shall attempt to let go of that. I am writing for the sake of writing, trying to get this 10-stroke typing engine fired up again. Okay, I will not completely let go. I will at least mention what we’ve done since the last catastrophe-filled post, then I will proceed with whining.

The boys and I spent the last 3 weeks of August in Florida. We had all sorts of beach, Legoland, shopping and family adventures. To be random, I’ll share that Ian figured out how to balance a penny on end, Isaac made friends with dogs, Elijah bathed in ice cream, and I masked out a giant tree on on mom’s wall.

In early September, we went to Hillcrest Orchards, which had an array of  southern-style activities (think pig races, cow-milking, pedal tractors, moonshine museum) inversely proportional in variety to their apples. At the end of September, we took the boys to Amicalola Falls over the weekend for their first camping trip. We kept it short, being a “test trip” and potentially a disaster. It was a ton of work, but the boys loved it. They had not a moment of boredom. I surprised myself, being unusually depleted of a sense of adventure, and sat by the camp fire much of the time that the guys explored. Doing nothing felt really good. After packing our gear back into the van on Sunday, we drove to Mercier Orchards and loaded up on apples. The types we liked seemed fairly picked-over, since the apples came in early this season, but we still acquired a good haul.

More generally, Ian has begun sounding out bigger words and reading easy books. Ian and Isaac have been using paper and tape to make superhero outfits for their stuffed critters. Isaac has been very loving and quite responsible about keeping toys picked up. I don’t think we’ve had any recent E.R. trips with Elijah, though that’s not for lack of a high chair falling on his forehead or crashing headlong into his brother during “stunt time,” or falling down stairs or otherwise being his over-daring self. We are well-past swimming season in our neighborhood, but the picture at the top of this post of Isaac trying to assist Ian in getting Elijah’s swim diaper on fairly well-illustrates the sidekick/mini-dad/super-sprite dynamic happening in the house on a daily basis.

May I whine now? Back in July, when I imprudently chopped my Left pinkie with an *eh hem* hand pruner, I had NO idea what an ordeal it would be. I don’t know what time I would have spared going, in the first place, to an E.R. with a hand specialist on staff, but I essentially had my hand sewn, only to have it cut open again in a week by a hand surgeon to have a nerve repaired. Long story short, I was in a splint, with some initially astounding pain, for about 6 weeks, followed by weeks of self-rehab, trying to regain range of motion from the splinting, and maddening tingling, prickling and numbness. I still can hardly stand to touch it, but I do because I need to massage it. I still have mostly numbness on the outside half of my pinkie, though it is slowly converting to the horrible prickly feeling. I can tell I still have work to do because, although my hand strength is good, my scar is tight and it hurts to put pressure on it, as I would do with floor exercises or gym equipment.

That brings me to the rest of my fuss. That hand ordeal put me out of the gym for months. ALL my former progress is gone. I’m so sad. I haven’t been exercising…or typing. I’ve just been pitiful and unmotivated. Now, the weather is cooler and I’m trying to prod myself back into the long haul of fitness and the discipline of blogging, and getting my act together in general.  It’s time to crawl out of the funk.

p.s. Speaking of funk, for a long time, I had a really stinky right arm pit…useless Left hand and all.