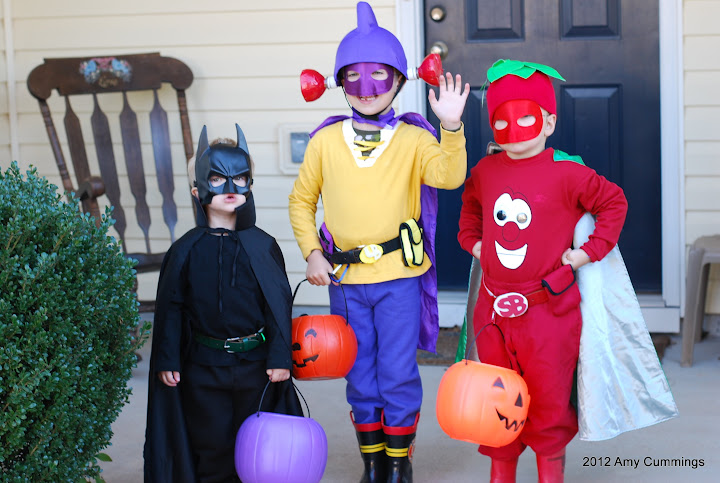 I present to you the 2012 candy collecting crew. Left to Right we have a 2.5 year old bat, a 5.5 year old Larry Boy (from Veggie Tales), and a 4.5 year old Super Bob (the Tomato, also from Veggie Tales).  As we Trick-or-Treated around town, those individuals familiar with Veggie Tales recognized them instantly. The rest of the observers complimented Ian on his interesting ears/light bulbs/horns. I say I would like to have simply purchased costumes, but the boys were sure of their character choices and, those characters are generally not for sale.

I cruised every thrift and consignment shop in town once or twice to find all the right colors and styles of garments, belts and capes. I had to get creative with the hats. For Ian’s Larry Boy helmet, I started with a plastic costume hat. I needed styrofoam for the fin. Michael’s had a block for an obscene amount of money. I was so mad, that inspiration struck and I drove behind the shopping center and found gobs of styrofoam lying around near dumpsters. I found a cheap purple hood and stretched it over the helmet, gluing with spray adhesive. Larry’s “super suctions ears” took me a bit to figure out. I used plastic bottle tops and screwed the lids to the helmet. I covered the remaining dome with duct tape, and attached the domes to the lids with a rubber band so he could at least make them dangle, instead of being launchable like he  really wanted. The domes then simply screwed onto their lids. Isaac’s hat is a stocking cap with duct tape leaves tied on top. I made them belt buckles out of craft foam.

It was tons of work, and didn’t save any money, but they will wear these costumes indefinitely, without them fraying in a couple months like the $20 ones do. They were thrilled and I loved watching three handsome (and well-mannered) superheroes power their way through the day!

Isaac made a humorous commentary after coming home from our morning Trick-or-Treat downtown. I let him eat a few pieces of candy on the way home and he walked in the house and sighed, “I’m done eating candy now. I ate too much. I’m going to poop now (Ah-ha! Thus appears the true explanation for that full-belly feeling!). Mom, hide my candy in case I forget that I’m done eating it.” If only we all had a “hider” on staff.