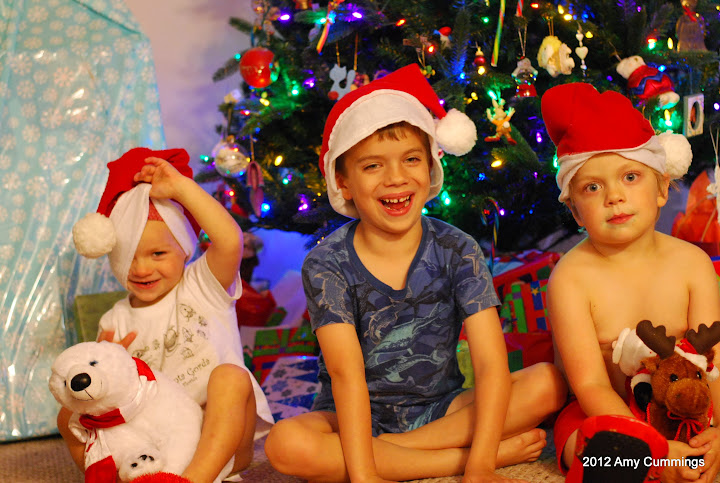 If this post smells like Lysol, it’s because I’m hiding in the bathroom. Isaac is feeling a little assertive this morning about getting his “special time” with mom. Lately, when someone offends his sensibility, he considers it an automatic ticket to some Special Time. This morning, before we were out of bed, he was telling Elijah that after cereal for breakfast, he was going to have Special Time with mom and it was going to be VERY special, during which Elijah was going to watch a movie.

I fixed cereal and told the boys I was going to write a blog post. Isaac said he was going to set up his new Headbandz game. By that, he meant he was going to affix a band to my head and start the timer. He and I played this game for the first time last night. It’s pretty fun and simple. You put a card in your headband and try to guess what it is by asking questions. Isaac wanted only to hold the timer and have me guess. I had a penguin in my band and eventually drilled down and asked if it was a bird. He answered that it is an Antarctic bird. He has a tendency to give away the answer. On another card I guessed “bird” and he said, “Actually, it’s a Scarlet Macaw.” On a third, I asked if it was food. He said, “No, but it’s drawing food.” Hmm, must be a pencil. This morning, I had the parrot in my headband again. I asked if it was an animal. He said, “Yes, and it’s standing on a TNT pusher, so it’s going to blow you up.” The “TNT pusher” turned out to be a bird stand. Then, he didn’t even bother with secrecy when he stuck the next card in, giggling as he said, “I want scissors to snip your hair!”

We played Ian’s new Monopoly Jr Party game last night. Isaac didn’t want to play, but Ian and Elijah played, and Elijah blew us away with his attention span for it, being not quite three. He even handled the Monopoly money with care. It is a good counting practice game – at least up to “six,” and who doesn’t love a party? After a few die rolls, Ian figured out that two threes equal six, based on the dot layout on the die. He’s the one who seems least interested in math, so I’m thrilled about that. 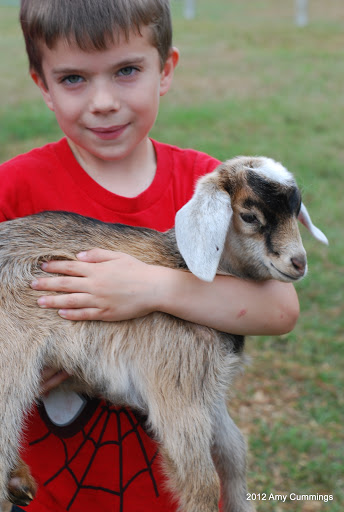 We finished 2012 off with a blast, as we did our Georgia Christmas, and then down to Florida for our Christmas Eve with my parents and Christmas Day with Brian’s parents. I love getting that time with family, and watching the boys and grandparents spoil each other. I wish we lived closer together so they could see more of each other. And, maybe there’s a few selfish feelings in there too *wink*.  Grammy and Grandpa took the boys to visit with some baby goats at a friend’s house. I had mentioned something about goats being nibbly, and that scared Isaac, so he didn’t participate. I just never know what I say that will be taken so seriously. Grandma took the boys to a friend’s house so they could watch the neighborhood parade. It was a modest parade of “more experienced” youngsters (you know, the ones with lots of laugh lines), complete with a Santa sleigh, lots of blinking lights, and candy and necklace tossing. Our friend was the blinking, dancing Christmas tree. The kids had a blast, probably as much or more as they would at a big city parade, since it “went around twice.”

We also went to see ICE at the Gaylord Palms resort, with both sets of grandparents. It was a frigid exhibit of Madagascar (movie)-themed ice sculptures, including 4 big ice slides that the boys loved. We were all given parkas to wear, so it was easy to imagine being a polar bear or penguin, looking around and seeing everyone as relatively the same shape and color. It was tricky to keep track of each other. The sculptures were colorful and impressive. At the end was a clear-ice nativity scene – quite amazing. 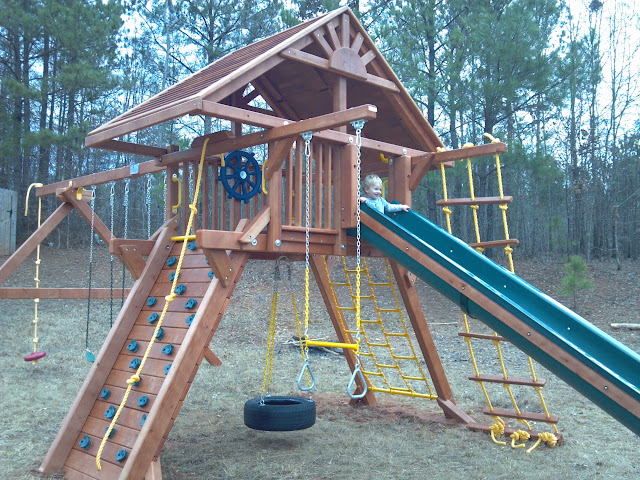 We returned home late last Sunday, and Brian and I had to nearly tranquilize ourselves from the giddiness of knowing the boys’ new swing set had been installed during our absence. We knew it would be wise to wait until morning. So, on the morning of the last day of the year, we fought to keep everyone snuggled in bed while I warmed clothes in the dryer. As Brian finished up tying on shoes, I sneaked out back with the cameras, waiting to catch their reactions when Brian opened the door. There was some major jaw dropping for some little mouths. Ian wanted to know if it came in a box. The other two kept saying, “Wow!” It is pretty “wow.” Isaac says that “the next time Elijah asks to go to the playground, we can tell him it’s right here.”

I don’t want to officially make any resolutions, but I would like for my mass to be less susceptible to holidays and other such foodie events. Just when I make some progress… I’d also like to laugh more and make more quality time for girl friends. Suddenly, I “get” the value of having them.

AND…now that I have a zippy new Chromebook, maybe I’ll be more consistent about blogging. I do blame Facebook. I immediately post all the funnies so I don’t forget them, because I totally will, and then I feel all redundant to blog them. Perhaps redundant I shall be.