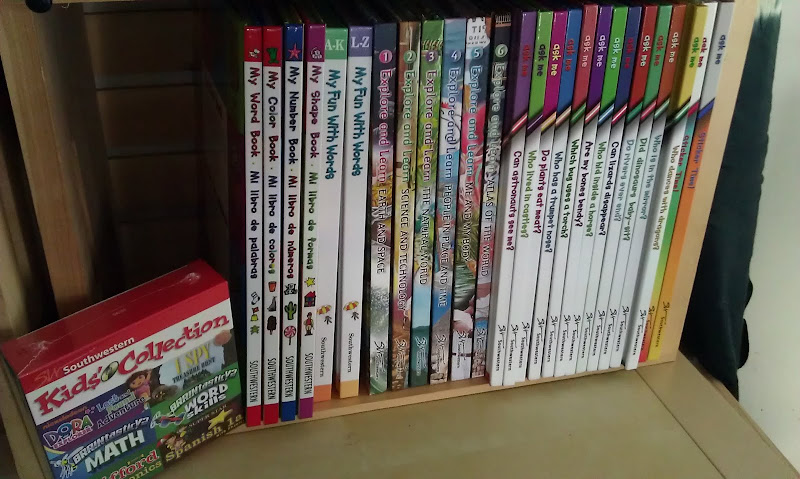 We just bought a really cool new educational book set for the kids. It’s actually 26 books, interactive computer programs, “cling” stickers and laminated posters. And it was really stinkin’ expensive. But…we have our hearts set on homeschooling, and these books contain most of the subjects I’ve really wanted to start covering. Many of them are designed, such that I can use them with any of my boys, age 18 mos to 4.5.

Isaac has really loved them so far. We read one entire “ask me” book last night, before he slides out of our bed and says, “I’m going to bed now.” (I love how he loves his bed.)

We read part of another book this morning and played with a sticker book before heading off to stuff my 4-year-old son’s heart in a cannon and aim it at a chipper shredder (translation: pick him up from his best friend’s house). I don’t know if it’s normal, the level of attachment Ian has to “L”. Ian has said many times he wants to live at “L’s” house. He spends the night there every now and then, and when we show up, he’s happily snuggled into “L’s” coolest pajamas and adorned with any number of “L’s” dress-up accessories – pirate patches, Buzz Lightyear wings and the like. I showed up, planning to give Isaac and Elijah some play time with the big boys before leaving. Ian, as usual, didn’t acknowledge me, other than to shoot me a glance that clearly meant, “You’d better not be thinking what I think you’re thinking.” It’s a welcome improvement over the screams of fury I used to get; I used to enter carefully in phalanx formation.

I’m not exactly sure the best way to handle this, but my goal is to find an approach that is in line with Attachment Parenting philosophy. My visceral reaction is feeling like knocking him into next week for his “blatant disrespect,” and threatening to not bring him back, but, I know this isn’t about me. He has huge feelings of disappointment and sadness when he has to say goodbye to this one person, and he doesn’t know what to do with them. He doesn’t need more bad feelings of being scolded. He needs help finding an appropriate way to express his feelings. I’ve tried many approaches, and they don’t seem to have an obvious impact, but I hope they are slowly sinking in.

I start by giving him a series of events to anticipate: “First we are going to have a snack, then we are going to pick up toys, and then we will go home.” He yells in response, and I say, “I do not like being yelled at. It’s okay and normal to feel sad about leaving, but it’s not okay to yell at me. You may use your words to tell me how mad you feel.” I give some countdown updates, and then say, “Okay, we are leaving now. Would you like to tell “L” ‘See you later’, give him a hug, or just walk to the car? He typically protests doing any of the above. I remind him that we are leaving whether or not he says goodbye to his friend, and that he has control over his own response and level of cooperation. I also remind him that I did what I said I would do, and let him go to his friend’s house, and that it’s important to me that he does what he said he’d do – cooperate about leaving. Sometimes I try to discuss the situation from our friends’ view, explaining how they have family things to do, or that his friend’s mom needs to go to bed early so she can have a good day at work the next day. I tell him if he does not choose how he wants to leave, I will carry him to the car, but that his friend really likes a big goodbye hug. Rarely will he choose a friendly way out. At best, he sulks and walks out the door, where I try to engage him in a little game of chase and he tries really hard not to laugh. At worst, I haul him kicking and screaming and pry him into his car seat, which I don’t like at all because he will then feel completely defeated. I don’t know how to outsmart the situation. I can’t even tantalize him with leaving for something highly desirable, because when he is there, nothing is more desirable.

In the car, or at home, if I try to help him put his feelings into words, he just yells for me to stop talking, and that he doesn’t want to hear my voice. I say, “You can say, ‘I don’t feel like talking right now’ or ‘I want to be alone right now,’ and then stay close, but quiet until he calms down, which can be a long time. Sometimes I wonder if I have a short 15-year-old. When he calms down and his dad or I try to talk about the situation, we get silence. He says nothing. I’ll ask if he’s still too upset to talk, and he nods. Waiting much later, he’ll say he feels very sad and angry about leaving. I asked him what we can do to help leaving not be so hard, and his response was, “Let me stay at ‘L’s’ house until Jesus comes to take us to heaven, and then ‘L’ can come with me.”

During happy times, when discussing the prospect of going to “L’s” house, I confess that, “I love to give you time to play with your best friend, but I do not like fighting about leaving, and I do not like to be yelled at. How can we visit ‘L’ in a way that everyone has good feelings about it?” He replies that he will leave without a fuss. I applaud him for his idea, and we agree on it. Later, I remind him of what he said he would do. Yes, considering his level of attachment, I know it’s asking nearly the impossible, but I feel like it’s important to practice.

I get grief sometimes about giving my kids too many decisions and not coming down hard, because “I’m the parent and they need to know who’s boss.” I’m pretty sure they know I’m the parent and that I have a major say in what happens. Besides, in the real world, is it ever acceptable to yell, berate, manipulate or hit another human into doing what you want? I’m not interested in raising soldiers or robots. What better time to give them practice making decisions, than in a safe, supervised home environment, with fairly mild natural consequences, and while they have such an intense need to feel in control of something in their lives. I want to raise thinkers. I don’t want them to one day withhold an important conversation for fear of being scolded. It feels right to me. Giving decisions communicates, “I trust you. You are capable.” I think providing a living example and a “redo,” accompanied by specific suggestions for a more appropriate response is more effective than punishing them for doing the only thing they know how to do. How silly would it be if I, never having done or seen lawn care (Bahaha!), but wanted to try, went out back and started cutting the grass with scissors, and my husband only yelled at me and told me I can’t use scissors? Wouldn’t it make more sense if he were to say, “Here, try a lawnmower,” and then showed me how to use it? In this case, it would be of zero use for him to fixate on how mad he felt that I was using the wrong tool, or how annoyed he was at how long I was taking, or whatever the case may be. His feelings can be addressed at some point, but are irrelevant to the goal – getting the lawn mowed in the most reasonable way. Somehow, the “gentler” approach gets confused by some people with letting the kids run wild with no rules or discipline, with them somehow manipulating or controlling us. On the contrary, they have an enhanced sense that we value their opinion and are depending on them to be responsible, value-driven and true to their word.

Now, I shall step down and ask, “Does anybody have any great ideas for helping Ian get out the door feeling a little better?” Please comment with your suggestions. I am feeling far less than effective at this!  Ultimately, Dad took him on a walk for some fresh air, and I was able to further distract him with a really cool new book on space.  🙂