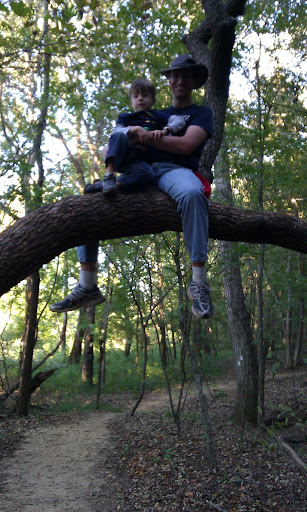 Today is the 35th birthday of the man of my dreams, who fortunately happens to be the guy I’m married to. We got to go on a once-in-a-lifetime date last night, while he was still a youngster (only teasing, my young buck). It wasn’t like we cruised on a billion dollar yacht and ate off of diamond plates, or anything. We just hardly ever get to go on dates. The plan was a fairly typical dinner and a movie. It was going to be a nice dinner and a great movie, but when I called the restaurant, the guy got huffy with me about honoring the purchase value of my expired Groupon, so I was suddenly in the mood for “whatever” and a movie. Then, I started watching movie trailers, since I think they used painted sheets for backdrops the last time I’ve had the pleasure of watching a live action movie. I got to the end of the list and realized not a single one gave me that “Yes! We’ve got to see that one!” feeling. Truly, I would want to see most of them, if I were in regular-viewing mode, but to pick the movie captivating enough to hold the honored evening-disintegrating slot in our three precious hours of solitude just wasn’t happening. Brian came home from work and I set him in front of the movie list, hoping he’d be struck with excitement, but the choices fell flat on him too. We said goodbye to Ashley and the boys and cruised down the street, in awe of the lack of cacophony in the back seat. We decided on our favorite Thai restaurant, still unsure of what was to follow.

Our server politely let us hold our menus for a few moments, before asking if we wanted our usual Thai ice tea, Panang Curry and Pad Thai. Over dinner, we chose, somewhat indifferently, to forego the movie. We, instead, took a short walk, briefly browsed the book store, played a couple games of pool, and went to our favorite Italian restaurant for dessert. We then pulled back in the driveway, spied our sons through the window and fell in love with them all over again.

This afternoon, I sat the boys down at the table to sign Dad’s birthday cards. Isaac wanted me to hold his hand as he wrote his name. Ian wanted to write his own name, and had me spell Elijah’s name to him. One the front of the envelope, I suggested he write “Dad,” carefully enunciating the letter sounds. He thought for a moment and gave a most surprisingly organized response: Hmm, with one ‘A’ and two “D”s? With an ‘A’ in the middle?

I’d seen colored play rice on the internet a lot lately, so I decided to give that a shot today. 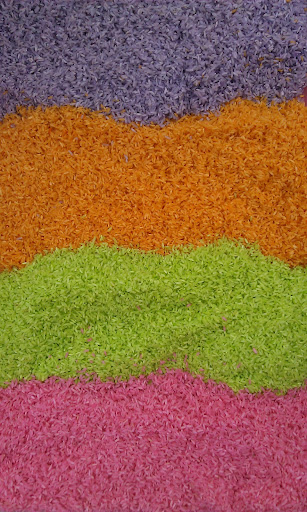 The boys had fun scooping it and running it through a sand mill. Ian luxuriated in it. 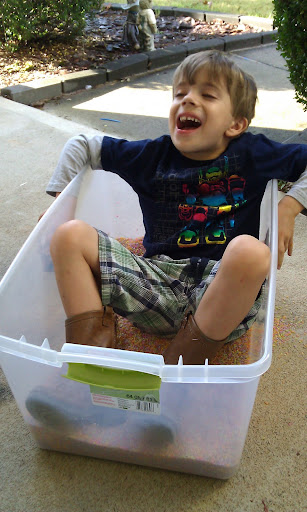 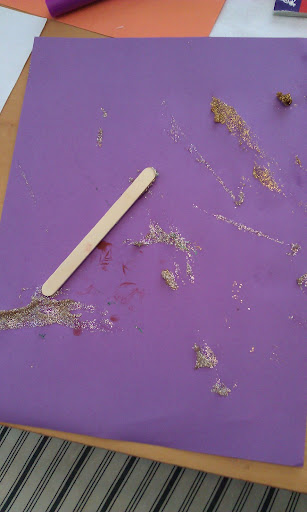 I always enjoy when Isaac gets immersed in a project because he starts crooning. As I’ve probably mentioned before, he has (somehow) chosen “Sky Rockets in Flight” (Afternoon Delight) as his favorite song. I’ve also heard, “I’m gonna drive it all night long” (Life is a Highway), “I want to ride my bicycle” (Bicycle Song), “I’ve got my mind sealed on you” (I’ve Got My Mind Set On You), and a number of impromptu creations.

I picked up a bathroom door knob at the store today, since the boys had wriggled the old knob’s plastic parts to pieces. Once assembled, the handle was turning only one direction and I was beginning to fume about having purchased the cheapest knob, when it occurred to me that it might be possible that my four year old assembled it incorrectly. I assumed it would fit only one way. Ian was in need of a drink after the hard labor of turning two and a half screws, so while he was away, I disassembled and reassembled the knob and that time it worked properly. I situated him on the patio with a short hammer and some nails I started for him in a piece of wood. He was in the process of bending his second nail when he fled the only 10 seconds of hot sunshine we’d had all day, for a more hospitable indoors.

I realized today that my 21 month old can now get both feet off the ground when jumping, and has suddenly become tall enough to operate the tricycle and balance bike, much to his satisfaction. It’s getting harder to deny that he’s a rapidly growing toddler and not my tiny little squishy baby.

The boys have been playing for HOURS with this silly cardboard spy fort I made them the other day. I say take that, Imaginext! 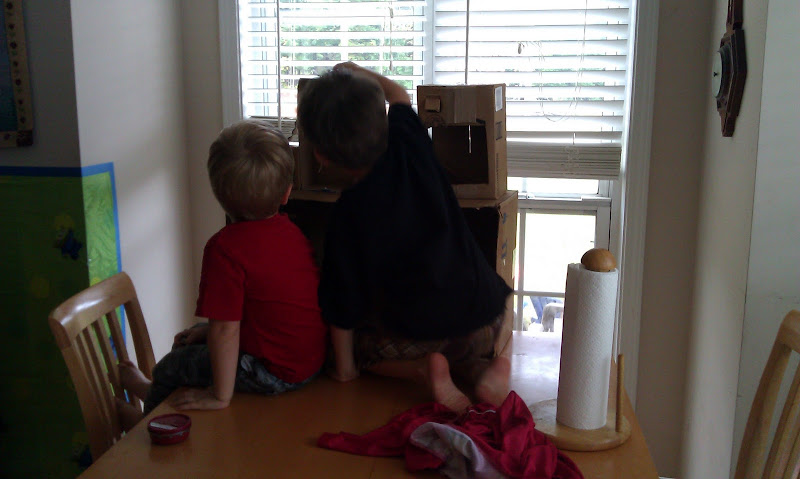 Each of my boys has developed a maddening little habit. Ian licks his lips constantly, therefore giving himself a near-permanent red ring around his lips. Isaac has taken to smelling his lips. I’m not sure if that’s what he’s actually doing, but he puckers his lips and hoists them up to his nose, frequently subsequent to touching his nostrils with his first two fingers. What amuses me most is that I seem to have a memory of doing the same thing as a kid. Elijah repeatedly shrugs his shoulders. That’s actually kind of cute. Yet another obstacle to cute pictures.